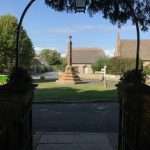 Walking through the gateway of the churchyard, an instantly recognized names was inscribed in stone. He was a familiar presence in the farmyard, a firm friend of my grandfather. The soft cream colour of the headstone with the plain, unadorned inscription captured a sense of the man he was. Anyone who knew him would have remembered a man who was solid, reliable and unostentatious. He was a man with tough hands and a gentle heart. Of my grandfather’s generation, he had married late in life and his daughter was around the age of my sister, perhaps a child in middle age had brought a softness into his farming life, perhaps the strong exterior had always concealed an inner gentleness.

My grandfather had died in 1991, at the age of seventy-seven. The gravestone told passers-by that his friend had been seven years younger than my grandfather, and had died in 2012, at the age of ninety-two. It seemed odd that he should have outlived my grandfather my almost a generation. Had my grandfather lived into the age of broadband Internet and smartphones, it is difficult to imagine that he would not have made a few wry comments. Perhaps his old friend would have had a similar perspective on information technology, perhaps he would have been unimpressed by devices that could connect you to someone on the other side of the world, but isolate you from the companionship that came with standing in the barton on a summer’s evening with a friend you have known all your life.

The grave stood out from its neighbours, in front of the memorial stone an array of plastic windmills had been planted in the ground, among them lay an infant’s toys. A grave marker gave the name and dates of a little girl who had been buried there four years ago, she had been eighteen months old. For a moment, tears pricked my eyes. My grandfather’s friend had died old and full of years, four score and a dozen more. The child, a great granddaughter had been buried just two years later.

Stepping back and turning for home, I thought of the two men, laughing and smiling together, hard hands and soft hearts. 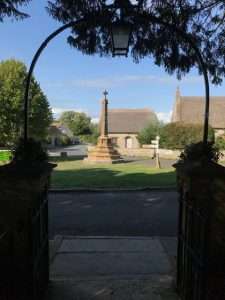