It is Libraries Week from today until Saturday. There are days and weeks and even months for numerous things now, most of them instantly forgotten. However, libraries have changed the lives of many of us, they certainly made a great difference to me.

In childhood days, our library in Langport was a single room upstairs in the town hall. Working through its entire stock of Captain W.E. Johns did not take long; they were followed by all sorts of pony stories, Herge’s Adventures of Tintin, and anything else that did not seem boring.

The family must have exhausted the possibilities of both the branch and the mobile library van that came to our village, for we transferred our borrowing to the much bigger library at Street, and then, when it grew thin on possibilities, to Bridgwater.

Probably due to underfunding, school libraries seemed poorly stocked and uninspiring places; musty old reference books, out of date encyclopaedias, and text books on esoteric subjects. Sixth form college was more exciting, though the library was a place to work, as well as a place to read, and never invited browsing the shelves.

University brought the British Library of Political and Economic Science, a vast treasure trove where the sheer amount of interesting stuff meant hours were spent doing no work. Reading microfiches of 18th Century newspapers could easily take up an afternoon that was meant to have spent writing an essay.

Trinity College in Dublin should have offered infinite possibilities; the problem was that it was not possible to browse its vast stocks. Most of the books were held at some distant warehouse and had to be ordered in; it hardly seemed worth the effort for something where the intention was to do no more than flick through.

The moment of delight came in 2004 when beginning a part time course at Trinity College in Bristol. The librarian explained that if one was in the house, then the library was available whenever one wished to visit. It was bliss. On the first evening of the lecture week, I went down to the library at ten o’clock, switched on some of the lights and just wandered around the shelves, reading the titles to myself. Had I had the brains, I would have loved to have been an academic and whiled away the hours in rooms such as this.

Books are like the best of friends, always reliable, never nasty, always there. Should I ever reach retirement, to pass the days in a good library would seem the nearest thing possible to heaven on earth. 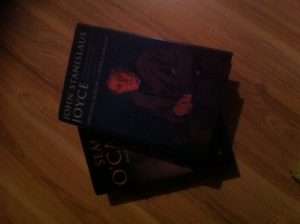