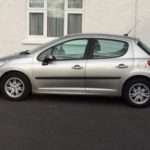 The car had a new timing belt fitted today. Bill and Leo would both have been able to explain of the function of a timing belt, I haven’t a clue.

One day, I called with Bill, who was about ninety four years old at the time, to discover that newspaper had been laid neatly across the kitchen table and on it there were two engine parts. He had noticed my quizzical expression.

Whatever mechanical knowledge I may once have had has long since faded into nothingness. A magneto was something to do with the electrics in an engine, but what it did and why it was necessary were mysteries.

“I have a 1947 lawn mower I use for cutting the grass; an air cooled four stroke engine. The magneto has gone on it; I’m looking for one that works.”

There were only two magnetoes and they were neatly placed upon newspaper, the penetration of domestic dwellings by engine parts is often much more drastic. In the 1970s, Jasper Carrott’s parody pop song Funky Moped contained a complaint that his mother wouldn’t let him fix the machine in the kitchen, instead he had to go out to the garden. Carrott’s lyrics presumably reflected a complaint familiar to young men attempting domestic mechanics, and a tribulation faced by mothers trying to free their homes from grease marks and the smell of petrol. A relative in London used to have a room in the house where a dismantled motor cycle awaited the day when it would be reassembled; perhaps it was awaiting a magneto.

Leo, an octogenarian, was the worst case of mechanical infestation. There was a workshop and sheds, but they did not offer the prospect of making tea and sandwiches while contemplating engine parts. Every worktop in the kitchen was covered with an assemblage of mechanical ironware; the original intention for most of the pieces probably long since forgotten. There was no sign of a complete engine in the kitchen, perhaps due to a lack of space.

Attending a dinner, a parishioner commented that they had seen my car at Leo’s house. “Did you find anywhere to sit down?”

I admitted that there was rather a lot of metal in the place.

“You haven’t seen the worst of it. He has those sheds and every room in that bungalow full of bits. When his wife was alive, she was lying in bed reading a book when night when he was out in the workshop. There was a cracking noise above her and an engine fell through the ceiling. If she hadn’t been awake, it would have landed on her and she would have been dead.”

The story invited laughter, but the teller seemed deadly serious. Could it really have happened?

The odd thing about the mechanical men was their contentment. The 1947 lawn mower was rarely more than seconds away from a smile. The ceiling breaker would walk out of church each Sunday morning beaming, look up at the leaden grey skies and laugh, “It’s clearing up for a wet day.” He lived alone and without fear, “Reverend, look at what I keep for unwanted visitors,” he would pick up an eighteen inch First World War bayonet.

“You wouldn’t use that.” 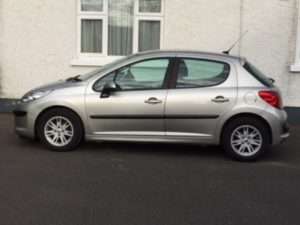