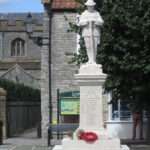 Surrounded by undergrowth, shrouded in ivy, the buildings become less and less visible as the years pass. Perhaps the ownership of the land is unclear, perhaps the deeds lie gathering dust in a distant office, perhaps no-one wants to claim responsibility for the pockets of rough land and the ruinous structures.

Once they were the property of the War Office, or the Royal Air Force, or whichever branch of government that was responsible for airfields and their associated installations. The purpose of the short, squat tower-like buildings never seemed entirely clear, when bombers flew took off from the runways built across flat Somerset moorland, the function of each building would have been more apparent.

In my younger days, the buildings brought an ambivalent feeling. There was something reassuring about their presence: they were a declaration that my family and my neighbourhood had been part of something for which the aircrews would take off into the darkness, uncertain of what dangers may await them. The reassurance came with a dark shadow. The bomber crews sustained heavy losses; the aircraft returning fewer in number than those which had departed. The bombing missions might have been against military targets, or they might have been against cities whose streets were not so different from those of London, where my grandfather had been a fireman during the Blitz. The airfields in our community had brought with them their own dangers, Luftwaffe attacks in the area might be against the airfields, or might be against much more vulnerable targets. In 1942 the Cow and Gate milk factory in Somerton had been bombed by a bomber flying at roof height in daylight; eleven of the forty people working in the factory had been killed.

Each brick in the airfield buildings tells a story of times now disappearing from memory. The drone of aircraft engines and the sound of airfield vehicles and the bells and sirens of alarm and the thud, thud, thud of anti-aircraft guns and crump of explosions are sounds now only to be imagined. It is good such fearful noises are no longer to be heard, but their absence, and the gradual disappearance of the runways, and the year on year decay of the buildings, brings with it a forgetfulness.

Whilst the Great War commemorations have filled the past four years, significant numbers of the surviving veterans of the Second World War have died, taking with them memories of the times. To have served in the forces between 1939 and 1945 and still to be alive means being at least ninety years of age. In the next decade or so, the bricks will be the last reminder, still in their original place, of events that seemed so fresh in the memory. 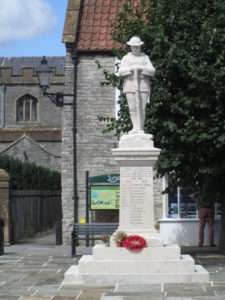