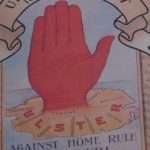 The revelation from the Irish State Papers of 1988 that IRA and UVF prisoners had held talks on the possibility of a federal Ireland should hardly come as a surprise, where else would alienated Loyalists have looked for a way forward? Thirty years later, the lot of Loyalists has not improved. The behaviour each July of the bonfire builders and the flute players is an expression of visceral feelings; it is expressed in the burning of nationalist and Roman Catholic symbols and it shows little indication of a communities secure in themselves.

Loyalists provide votes at election time, and are mostly ignored for the rest of the time. Stories from the Belfast shipyard community in the 1940, 50s and 60s tell of a proud people who received little reward for their loyalty to the unionist political establishment. Not that talking about the need to improve conditions in Protestant communities achieved much, “every election the drums would be beaten and they would go out and vote for the same old politicians”.

Early in training for ministry, I learned not to talk about deprivation or alienation in Protestant communities. A placement in September 1984 brought experience of a parish on Belfast’s Shankill Road. Returning to the rural Co Down community where we lived, I tried, one Sunday morning, to talk to those in church about the social and economic plight of working class Protestant people. No-one wanted to hear. It was 1984 and traditional Unionism was in the ascendancy. Afterwards, a member of the congregation on that Sunday morning took the curate of the parish to task, “That English fellow has no right to be talking about Protestant people like that”. There was a point blank refusal to accept that there might be growing grievances in poor Loyalist communities.

A decade later, and the Loyalists had embarked upon a campaign of sectarian slaughter against ordinary Catholic people. Few in the Protestant community were prepared to acknowledge that the monster had been created by years of neglect, years of denial. The Drumcree protests in the mid and late 1990s were probably the final rupture between Loyalism and the mainstream of the churches. While the churches’ condemnation of the violence and sectarianism was undoubtedly justified, there seemed little attempt to address the alienation, nor was there any desire to do so. While the residents of Catholic areas along Portadown’s Garvaghy Road participated in community development programmes, there was little comparable work going on within the Protestant communities across the Province where violence and lawlessness erupted in response to the banning of parades.

A conversation with a former UVF prisoner in the late 1990s was revealing. He reflected that problems arose from the fact that violence was seen as a way of solving disputes by working class people. People had not recourse to professional channels, or to the courts; if someone caused offence to the community, they would be beaten up. Similarly, people trapped in the cyclical poverty of some communities found criminality an easy avenue to prestige amongst one’s peers and money for one’s desires. The mainstream political parties, including Ian Paisley, accommodated themselves to a new political dispensation where they shared power with former sworn enemies; those living in the places of hopelessness found themselves ever more marginalised.

Loyalist aggression now takes the form of a self-destructive fear that most hurts the people and the communities in which it takes place – not that recognizing such realities makes any difference. A federal Ireland which drew Loyalist communities onto a different path might have created a future very different from that experienced by people in the poorest of places. 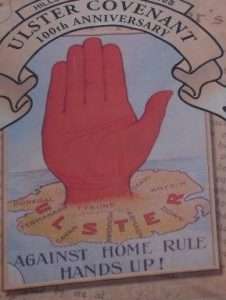