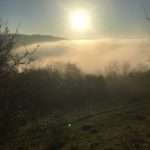 If it happened now, the story might appear in many places in many forms; on news websites, on forums, on blogs, on SnapChat and WhatsApp and Twitter and Facebook, and on the plethora of other online platforms. Twenty years ago, the options were not so plentiful,  the story might have been shared through Hotmail or posted on My Space or perhaps a handful of other places (though, with dial-up modem connections, pictures often presented a problem).

In the mid-1950s, what way might a story have been shared? Perhaps the local weekly newspaper might have carried a snippet among the stories from around the villages. Anything more than a brief mention of an incident would have been unlikely, and even then people would have thought that a person who passed on such a story about themselves was erring on the side of boastfulness. The idea of contacting a news outlet, as is now invited by media groups like the BBC, would have been thought the height of presumptuousness.

For much of today, thick fog has blanketed much of the moorland surrounding our village. While the village is a very modest three hundred feet above sea level, much of the countryside around lies three hundred feet below. Standing at Turn Hill, where the elevation from moor to hill is at its steepest, was like staring from the window of an aircraft above the clouds. Above there was blue sky, below there was a blanket of white fluffiness.

My mother stared out at the mist and recalled a cycle ride through icy fog from her work at Harvey’s hairdressers in Langport, to her home at Pibsbury, a place on the Levels. A car had skidded on the icy road, and, out of control, had gone over the bank of the catchwater.

Rushing to try to help, she found the car balanced precariously, and stood on the bumper to try to add weight to the rear of the car. A couple were in the car and while my mother did her best to balance the car, first the woman, and then her husband, climbed over the seats into the back.

The local vet, returning from a call, stopped and saw what had happened. “I am heavier than you,” he said to my mother, “I’ll stay here – go to the garage and fetch Bob Atkins.”

My mother pedalled to the garage where Bob Atkins had a breakdown truck. “Go and find Dick Weller,” he said, “tell him to come and help.”

My mother went to find Dick Weller – and then went home. There was no further need for her.

The couple stayed with Dick Weller and asked that my mother call in the next day so that they might offer their thanks. My mother was working late, so there was no opportunity to do so, and there the story ended.

Sometimes, the world before social media seems a much saner place. 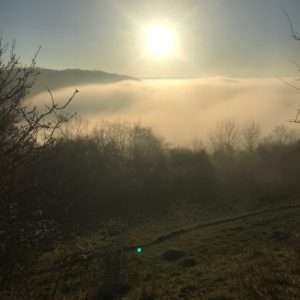