The difference between life in the French midi and life north of fifty degrees of latitude is the amount of time you are able to spend outside. One year, there was an opportunity to go to France for the Halloween holiday at the end of October. It was a time very different from the thirty degree temperatures of August, but it was still a delight.

Flying to Bordeaux from Dublin on an Air France flight was positively exotic compared to the usual journeys with Ryanair. A sporty Peugeot 307 hire car was available at a reduced price because there was little demand. The Dordogne farmhouse had a big, open fireplace and the logs stacked up the chimney provided great heat. It fell to minus six on the first night; the metallic blue of the car shrouded in a white frost. The days were clear blue and bright and the air was fresh and refreshing. Going to the castle in the nearby town and climbed to the top of its tower; the view was as good as it had been in summer, except there was no-one else there; there was almost a sense of guilt standing and looking across the Perigordin countryside. The restaurant food was good (and cheaper). One lunchtime, a white-maned writer with sheets of paper scattered across the table sat and wrote furiously with a biro and just as furiously crossed out as much as he had written. Life is lived much more in the open and the street markets were busy with autumn produce and game; rabbits and pigeons hung along a butcher’s stall; a paysanne sold excellent blackberries. The final afternoon had the warmth of an autumn sun; time to be bold and test the swimming pool used on so many summer hours. One width of the pool was sufficient; the water temperature a chilly ten degrees. As if there was an awareness that this was the last night; the Northern Lights appeared, great flashes of yellow and green across the night sky.

The Dordogne was not the same in late October as it had been in late August, but it offered as many chances for enjoyment. While wind and rain would have driven people at home indoors, the blue skies remained. On the only wet day there was diversion in the bastide town of Eymet. It was market day and two men were buying vegetables from a stall. Completing their purchase in competent French they turn and spoke to each other in English, with accents unmistakably those of Somerset. Being able to live life outside had drawn them south. 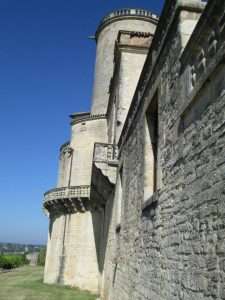