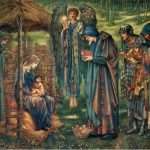 “Through the gospel the Gentiles are heirs together with Israel, members together of one body, and sharers together in the promise in Christ Jesus.” Ephesians 3:6

“You must have a great life”, she said to me across the table in the kitchen of her mother’s house. I was lost for words and mumbled some reply. I might have been from a different planet.

Her spiky orange hair and zebra-striped, skin tight trousers were the only cheerful things about her. She was perhaps eighteen or nineteen. She hated the flat she was meant to be living in and spent most of her time in her mother’s house to keep warm. Her husband was serving a three year prison sentence; her baby was suffering from a virus and cried loudly. It was a few weeks before Christmas of 1987; she wasn’t looking forward to the occasion. She hoped to buy two presents with her benefit; she would not be receiving many in return.

Yes, she had been to church. I remembered her being there. One evening the previous summer, she and a friend had appeared. You couldn’t have missed her orange hair. They hadn’t understood what was going on.

It is two thousand years after the wise men came from the East to visit Jesus; a visit which proclaimed that this child was for all people, everywhere. The religious people would have been scandalized by the idea that the Christ could be for anyone except the devout Jews; they would have been disturbed by this story of Gentiles coming into the plot; they would have greatly resented Saint Paul’s teaching that the Gentiles and Jews together had a place in God’s plans.

When the story of the wise men is read today, does it disturb? Those Christmas cards with pictures of three kings on camels, do they make people stop and ask, “what is this story about?” This story is about a man who is a man for all the people; for the foreigners and the outcasts and the disrespectable, as well as for the nice religious people. It is a story that should shake up any church member that reads it.

The orange haired young woman could have been anywhere in Ireland and, seeing her, I suspect most people in a church congregation would have reacted in a similar way: we would think to ourselves “she is not one of us.” But the very thing the story of the wise men says is that there is no “them and us”; that Jesus is for all people.

Jesus could have taken the easy option; he could have saved himself a lot of trouble. If he had said the things the religious leaders wanted to hear, he could have made himself very popular. Yet, right from the beginning, right from the time these foreigners come bringing their gifts of gold, frankincense and myrrh, Jesus is a man who comes to break down barriers.

The Gospel does not offer an opt out. People cannot say they are Christians and ignore all the people who are not like them. They cannot be exclusive about whom they let into their club.

It is very hard for traditional people to adjust to the realities of 21st Century society. People who come from a traditional country background tend to be much happier with the traditional way of doing things: services done in the old way, people who live according to the old values, it is much easier to stick to what is familiar.

But Jesus comes and shakes people up people. He asks questions of us about how Christians relate to people who are not like them.

The whole way in which the church does things can seem very odd to a stranger. It can sing songs with words they don’t understand to tunes they can’t follow. It can have ceremonies and rituals that seem odd and even bizarre to someone coming for the first time. Worst of all, it can have people dressed in medieval outfits in charge of what is going on.

How can the church become a place for the woman with the orange hair? In the years since that cold December day in 1987, it not has made much progress; yet being inclusive is not an option, it’s at the heart of being a Christian.

“Through the gospel the Gentiles are heirs together with Israel, members together of one body, and sharers together in the promise in Christ Jesus. “