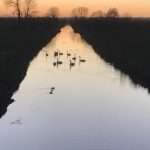 It’s that time of year when the Irish satirical website “Waterford Whispers” would carry the headline, “Stretch in the days upgraded to grand.” It was a greeting, a word of encouragement, a statement of the obvious, but welcomed, anyway. There was no need for a preface or further comment. Paying for diesel, standing at the supermarket checkout, passing someone in the street, the words “a grand stretch in the days” were sufficient by themselves to indicate a mood of goodwill.

It’s not as though the increase in the hours of daylight made that much difference in practical terms. Agriculture is not as significant as it once was in the Irish economy and large-scale farmers operate factory-like conditions. In Dublin, the lack of daylight was almost incidental to everyday life. Yet there were few people who did not welcome the coming of Saint Brigid’s Day and the passing of the dark quarter of the year.

Here in Somerset, there is no such greeting, but the stretch is there anyway. The stretch goes both ways, morning and evening. The feeling that spring is upon us comes not just in the growing light, but in the sounds around. The dawn chorus of the birds seems more audible.

Birdsong is one of those sounds rooted in the consciousness, a recall of childhood days here deep in the English West Country, the sound of the promise of another day.

Memories of other noises remain from those years when anything seemed possible, when the stretch in the days announced the coming of times when much of daily life would be spent outside and the world would look different.

Longer days brought sets of sounds that differed from those of the winter that had passed. Quiet weather meant my dad’s car pulling onto the gravel beside our house, when he got home from work, was more easily heard. The arrival of sheep with lambs in the neighbouring fields brought much bleating as the sound of an approaching Land Rover would bring them running to the gate. A new year’s work in fields, reviving after the winter, would bring tractors rattling over the unmade surface of the lane beside the house. Spring brought people out, there would be the sound of a neighbour calling his dog as they walked down the road in the evening time, the sound of children’s voices as they headed home before darkness. Happy days always included being outside to play after coming home from school.

A grand stretch in the days brought a grand multiplication of the sounds. Some of the sounds seem as clear in the memory as they were at the time. Perhaps it is about a desire for security for the sounds recalled are secure sounds; sounds of a world in which people were safe; in which the world was unchanged, unthreatened. Grand sounds. 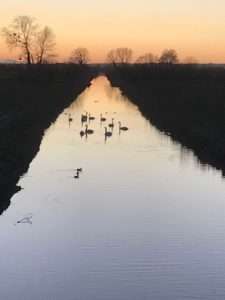