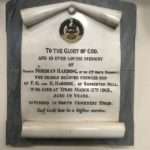 The dental appointment was at 9.30, not 9.00, a half an hour in which to walk in the town. The church of Saint Michael and All Angels in Somerton is dotted with memorials of the Great War. A plaque commemorates those who fell, another notes those who served, and around the church others are memorialised.

On the south wall of the nave, a white marble plaque commemorates a teenager from the town:

To the Glory of God
and in loving memory of
Private Norman Harding, of the 2nd Hants Regiment,
the dearly beloved younger son
of F.G. and H. Harding of Somerton Mill
who died at Ypres March 13th 1918
Aged 19 years
Interred in North Cemetery, Ypres
God took him to higher service

A three lighted stained glass window in the opposite wall has images of figures in the armour of a medieval knight. Each image has its own caption: “Fight the Good Fight”; “He endured as seeing him. Heb. 11:27” : and “Saint George.” Beneath the images, the caption reads, “To the Glory of God & in thanksgiving for the safe return of Major C.H. Phipps Hornby, 9th Lancers, from the war in France, 1914-1919.”

Both families sought consolation in their religious beliefs.

The survival of Major Phipps-Hornby was in itself something of a miracle. Cavalry actions against an enemy using machine guns caused heavy losses and Major Phipps-Hornby seemed to be at the forefront of the actions, being mentioned in despatches on three occasions. There was much for which a family might have felt thankful in his safe return. Yet the God who brought home Geoffrey Phipps- Hornby, who smiles from the photographs on his Wikipedia page, is the same God who was believed to have left the young Norman Harding lying in the soil of Flanders, taken “to higher service”.

A hundred and one years after the death of Private Harding and a century after the return of Major Phipps-Hornby, there has been no resolution of the contradictions. The Great War confronted the church with theological challenges that have remained insurmountable. Are the safe return of one man and the death of another the will of the same God? It is difficult to believe one could be part of his purpose and the other not. It’s a strange sort of God who arbitrarily inflicts suffering on one hand and blessing on the other

Perhaps those who sat in Somerton church a hundred years ago asked such questions as those questions posed by Geoffrey Studdert Kennedy, remembered by the soldiers as Woodbine Willie. Perhaps they asked the questions to which they knew there were no answers, yet they knew that without an answer, there could be no meaning.

Parson says I’m to make ‘im a cross
To set up over his grave,
‘E’s buried there by the Moated Grange,
And I ‘ad a damn close shave,
But ‘e were taken and I were left,
And why it’s a job to see,
For ‘e ‘ad a wife and some bonnie kids,
And me — well there’s only me.
And what’s the use of a cross to ‘im?
‘E weren’t a religious man,
‘E said no prayers and ‘e sang no ‘ymns —
I’ll make this do if I can.
It’s all full o’ notches — an awkward piece,
But I’ll see what a knife’ll do.
I allus were one to respec’ the dead,
And ‘e were a good pal too.
‘E weren’t a religious man, not ‘im,
Far as that goes—nor am I.
I wonder what odds religion makes
When a feller comes to die.
It’s a curious thing is death, ye know,
When we was back there at rest,
‘E were singin’ ‘is song—and takin’ ‘is glass
And ‘avin’ ‘is fun wiv the best.
‘E weren’t no booser though, mind ye that,
‘E were sound of ‘is wind and limb,
‘E were ‘ard as a nail—a fighting lad,
A daisy to scrap were Jim.
But ‘e’ll fight no more — ‘e’s gorn aht West
Wiv a great big ‘ole in ‘is back,
‘E’s pushin’ up daisies by Moated Grange —
Now where did I put that tack?
I minds me arskin’ a hatheist,
‘E were livin’ dahn our street,
‘E looked like a stick wiv a turnip on,
But talkin’ ‘e ‘ad me beat.
I minds me arskin’ in Railway Inn
What ‘e thought ‘appened the dead,
‘E took a candle and snuffed it aht,
‘ That’s what I think,’ he said.
But some’ow I carnt think that aht ‘ere, 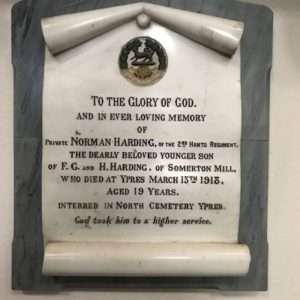