It is fifteen years ago that this blog began. Since then, there has hardly been anything among the five thousand odd posts that has not appeared at least twice or three times. To mark fifteen years of blogging, here is the first post – from 11th May 2004.

“I began researching my family tree recently. Particularly the family tree on my mother’s side, because we have virtually no information on my father’s side. I picked up a few threads and then asked my mother for some further information – a great sheaf of papers arrived from England around Saint Patrick’s Day and I spent hours reading through it all.

They were yeomen farmers working pocket handkerchief sized farms. Their families married into other local families and the cycle of life continued from generation to generation. Baptized in the medieval parish church, married there, buried within the walls of the churchyard; there was a reassurance in the continuity of the family.

The picture of rural life wasn’t as pleasant as it seems. In difficult times they lived in poverty, there is record of one family going to the workhouse, and death lurked at the door. My great great great grandfather, Thomas Luxton moved to Aller in Somerset where he married Hannah Sawtell in 1827. They had seven children. Jemima died at the age of one month in 1830. Daniel died at the age of four years in 1843, his baby brother William died at the same time at the age of four days, and they were buried on the same day. Four months after the death of her two youngest children Hannah herself died at the age of thirty-four. In the next generation there were fourteen children, six of whom were to die between the ages of four and twenty-one.

Reading through the family tree might provide a sense of reassurance, but it also provides a catalogue of pain and heartbreak. What sense did life make to Thomas Luxton, burying three of his children and then his wife? His anguish must have been something like that of a character in a Thomas Hardy novel, except of course, he would never have shown it.

Next time I am back in Aller churchyard I will quietly remember Jemima and Daniel and William Luxton, buried in 1843”. 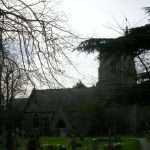