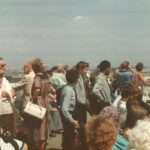 Going along on the M4 on a homeward journey from France with seventy Year 7 students, there came a memory of being in a minibus heading westward after a school outing.

It was 1976, Concorde had just begin commercial Transatlantic flights and one of the main purposes of our long journey up from Devon was to watch a Concorde flight for New York taking off from Heathrow Airport. In those times, it was possible to go to the airport and to go up to an open-air viewing gallery on the roof of one of the terminal buildings. A photograph from the time shows that we had been made to wear our school uniform of mid-grey shirts, charcoal grey trousers and school ties. The photograph also shows that the viewing gallery was filled with others eager to catch a sight of the Concorde flight.

Looking again at the photograph recalls my capacity for misremembering: in my memory, we had been allowed to not wear our ties and we had the gallery to ourselves.

It was that outing, forty-three years ago, that introduced me to the idea of misremembering, although the word did not exist at the time (and is still not liked by spellcheckers).

After the visit to Heathrow Airport, our outing had gone to Windsor. It had not been planned and we arrived at the moment when the ceremonial occasion in which Harold Wilson would become a Knight of the Garter was about to commence.

There was a crowd gathered outside of Windsor Castle and the only view that we had of the gathering for the ceremony at Saint George’s Chapel was through a low stone arch.

At one point there was a glimpse of an open carriage and people said it was the Queen. It was only a glimpse and, if I had been asked to testify under oath, all I could have said was that I saw someone in the back of a carriage, but it was no more than momentary and I was not sure who I had seen.

A few days later, a teacher asked what I had seen and I explained in as detailed a way as possible. “That’s good,” she replied, “that is exactly as it was. Some boys are saying that they had a good view and are describing what they saw.”

It seemed odd that anyone would want to describe something they hadn’t seen, unless they believed that they were telling the truth. The problem with misremembering is that you believe it is real. 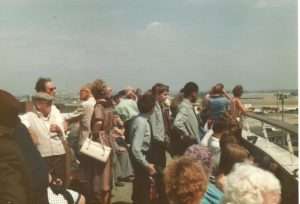