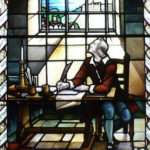 Terry Waite was kidnapped in Beirut on 20th January 1987. It would be 1,763 days before he was released on 18th November 1991. He spent the first four years of his captivity in solitary confinement. During those four years in a dark, windowless room, there had been a single glint of light.

Joy Brodier, a British woman who regularly wrote to political prisoners, sent a postcard to Terry Waite. Apart from his captors, no-one knew Waite’s whereabouts, so Joy Brodier addressed the card to: Terry Waite, c/o Hezbollah, Party of God, Beirut, Lebanon. How the card found its way to its addressee remained a mystery, but Terry Waite received it.

The day after his release, Terry Waite arrived back in Britain. At RAF Lyneham in Wiltshire, he talked of the significance of the postcard:

“I’ll tell you a small story which I told in Damascus. I was kept in total and complete isolation for four years. I saw no one and spoke to no one apart from a cursory word With my guards when they brought me food. And one day out of the blue a guard came with a postcard. It was a postcard showing a stained glass window from Bedford showing John Bunyan in jail. And I looked at that card and I thought, ‘My word Bunyan you’re a lucky fellow. You’ve got a window out of which you can look, see the sky and here am I in a dark room. You’ve got pen and ink, you can write but here am I, I’ve got nothing and you’ve got your own clothes and a table and a chair.”

John Bunyan spent twelve years in prison in Bedford for his refusal to accept the beliefs of the Church of England, his refusal to attend services at which the Book of Common Prayer was used. In his cell, he was allowed a copy of the Bible, Foxe’s Book of Martyrs, and writing materials. Compared with Terry Waite, he did indeed have an abundance of diversions.

The concept of social isolation today is a far remove from that experienced by countless prisoners and captives through the centuries. In pursuit of daily exercise, people enjoy freedom of movement, and even the government’s interpretation of what things may be regarded as “essential” is very liberal: essential shops include off licences and newsagents.

Feeling constrained by the prohibitions on travel and activities prompted a re-examination of the picture Terry Waite was sent. How would Bunyan have spent the time in which he could read as much as he wished, in which he could have had the world’s knowledge at his fingertips, and in which could have communicated instantaneously with whomsoever he wished? 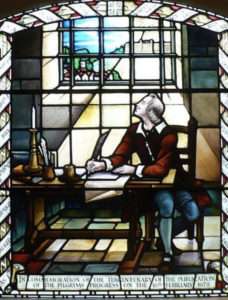