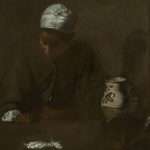 “Then their eyes were opened, and they recognized him.” There is a wonderful humanity in Saint Luke’s story of the evening of that first Easter Day.

The despondent disciples who are walking the seven miles from Jerusalem to Emmaus are joined by a stranger who walks with them and discusses all that has taken place. The stranger rebukes them for their failure to understand why things have happened the way they have. Reaching Emmaus, the disciples wish to show hospitality to the companion who has done so much to encourage them and they invite him to stay. It is only when they sit down to eat and the stranger takes the bread and breaks it that they recognize that it is Jesus who has journeyed with them that evening.

After re-reading the story, I searched on the Internet for a picture of the supper at Emmaus painted by the Seventeenth Century Spanish artist Diego Velaquez. It was a picture that always intrigued me when I visited the National Gallery of Ireland in Dublin.

It was only through the Internet search that I became aware that there are two versions of the painting. One hangs in the Art Institute of Chicago. For obvious reasons, it is bears the title Kitchen Scene. 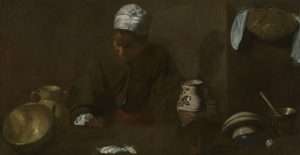 The Dublin version is called Kitchen Maid with the Supper at Emmaus. The painting was identical to that in Chicago and had been thought by some experts to be a copy of the canvas in Chicago, but in 1933 it was cleaned. The cleaning of the painting revealed the detail in the top left-hand corner of Jesus sharing supper with his disciples.

Comparing the two paintings might perhaps point to two conclusions that could be drawn from the words of Saint Luke Chapter 24.

A second conclusion is that the listener must now take the initiative. The disciples realize that Jesus has been present with them and, although night has fallen, immediately return to Jerusalem to share the good news they have received. In the painting, it is the kitchen maid who is in the foreground, the focus is upon her attentiveness to the words that she hears. How will she respond? Christians hearing the story of the risen Lord are now in the foreground of the picture. How well do Christian people listen to what is being said? What will they do with the news they have received?