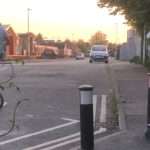 He was unmistakable. His face, his glasses, his hair, it was Erwin Schroedinger, the Nobel Prize winning physicist. Even the bicycle was of the large black type that would have been frequently seen in Ireland in the 1940s. He was a known opponent of the Nazis and was invited by Eamon de Valera to take a post at the Dublin Institute of Advanced Studies where he became Director of the School for Theoretical Physics.

Of course, had it been him, he would have been 132 years old, but in the world of sub-atomic physics, where strange things happen, perhaps 132 would not be an impossible age.

What caused me to doubt that it was Schroedinger was that I have visited his grave in the little Austrian village of Alpbach. Perhaps, however, the grave question might be resolved with the suggestion that as time happens all at once, that as past, present and future are an illusory convenience, then Schroedinger was cycling in his own time and simply appeared to be riding along beside the River Severn on an April evening six decades after his death.

More convincing than the problems of seeing someone in a different time was that the man on the black bicycle was wearing a the bright yellow high visibility jacket. Someone as stylish as Schroedinger would not have worn anything so garish.

If the odds of being passed by Erwin Schroedinger are excessively long, perhaps the likelihood of being overtaken by a couple riding penny-farthing bicycles are less so, but it would not have been something upon which I would have placed a bet.

Had I not snatched my phone from my pocket and taken a picture as the cyclists passed, I would have doubted my memory. I would have rationalised the images in my mind, adjusted the sizes of the wheels, reshaped the bicycles into conventional machines.

Why a penny-farthing, and a modern penny-farthing at that? Why not a conventional bicycle? Where do you go to buy a penny-farthing? Wouldn’t the person behind the counter in most cycle shops give you a strange look if you asked what penny-farthings they had in stock? Has the pressure of the lockdown become such that going out for ride on a penny-farthing bicycle has become a reasonable way of passing an evening?

Have these strange times in which we currently exist provided licence for strange behaviour? What other strange sights are there to be seen? 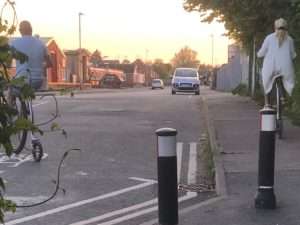