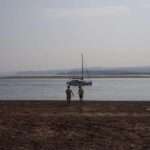 Two thirteen year old boys silhouetted against the Exe estuary on a summer evening. It is of such moments that a heaven might be made. A moment of perfect contentment, a moment when all is well, a moment when the outside world retreats.

There seemed something existential in the scene, something that spoke of youth and age and mortality.

Perhaps there was an evocation of moments just beyond the edge of consciousness, those thoughts that you know to be there but just cannot bring to mind. Perhaps it is a recall of memories that linger below the horizon of thought, a glimpse, a word, a sound.

Perhaps in the image of two teenage boys there is an undefinable reassurance. A feeling that experiences that were special to a boy in 1970 remain special for boys in 2020. A feeling that there are aspects of life from the pre-digital age that cannot be superseded by technology. A feeling that the past and the people who filled it still remain with us as long as the sensations of those times remain.

Perhaps the image offers an anticipation. Perhaps in fifty years’ time, when I shall have been long dead, the two thirteen year olds will watch teenage boys standing at the water’s edge. Perhaps, in 2070, standing on a beach will be one of the few experiences that remain unchanged from 1970.

If there is a single word that expresses the mood of the scene, it is gladness. Who could not fail to be glad in such a moment of laughter, joy, tranquility, optimism? If life is not about gladness, then it’s a poor enough thing. 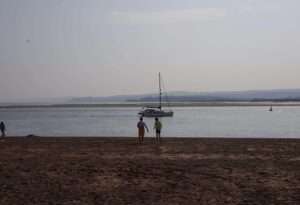