The road through the Warwickshire countryside was so narrow that the hedgerows on either side brushed the sides of the car. It was some years since I had driven a road just as narrow, it was a road where there was a danger of a collision with a local eccentric.

With a flat cap, black coat and a big black bicycle, he could have been an extra in an Irish drama from the 1920s onwards. In a monochrome picture, it could have been suggested to people that he had served with Collins in the War of Independence. On the warmest of summer days, there would be no change in his dress. His coat would be as firmly closed as in the dark days of December.

One afternoon, he stood in a gateway staring out over pasture land, the bicycle leant against the bars of the gate. The road was the narrow one recalled today and he had turned and waved as I had passed. Despite him being a familiar sight, I had not known his name. An inquiry at a house in the neighbourhood told me he was called, “Paddy.” I might have made a stab at that possibility myself.

Word in the community was that Paddy was offered local authority housing on a number of occasions, declining even a newly built residence in the town. His preference was for a caravan in a field, without amenities. In wintertime, he relied on candles to light the confined space he called home. Neighbours said he might ride into one or other of the local towns two or three times a day, eating at the fast food facilities available. Each morning he was said to travel on back roads to the larger town, wisely avoiding the busy routes where his wobbling black bicycle might have caused a collision.

Paddy was perceived to have crossed the line from being reclusive to being something more through his habit of attaching soft toys and dolls to gateposts and drainpipes in the roads around which he lived. No-one could discern a logical reason for such behaviour or discern from where the toys came. Where would a flat-capped man on a bicycle have obtained the numerous items people found tied in unlikely locations? Did he go to a shop and buy them with the specific intention of returning to his locality to fasten them in roadside places?

In childhood days, my father would talk of how effective had been the powder he had bought in ridding our village of elephants. “But,” we would object, “there are no elephants in England. “This did not negate his case, “That shows you how good the powder is,” he would smile.

Perhaps affixing toys to available uprights was as efficacious as elephant powder. Perhaps they kept away unwanted presences, or perhaps they made present something that was wanted.

Such eccentricity is becoming rare. 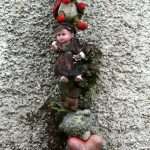