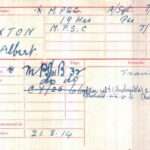 The stories of great grandfather Luxton have been told since I was a child. A man known for his self-discipline, his attention to dress, his precision, his high standards, he died in 1955, five years before I was born.

There were so many stories of the Second World War that tales told by those who had fought in earlier conflicts seem to have disappeared. Despite the fact that there were still some veterans of the Boer War still alive, and many more survivors of the First World War still among us, “The War” to us meant the conflict between 1939 and 1945.

It was my mother who sustained the memories of Albert Luxton. “Grandad Luxton was a cavalryman, he was in the hussars. He went to India when he joined up and didn’t come home for ten years. Then he left the army for a short time. If he hadn’t broken his service, he would have been more senior. He re-joined and was in the First World War. After the war, he went to serve in Ireland.”

Only the access to online records has made it possible to verify the stories recalled. Albert Luxton was 18 years and eight months old when he enlisted on 29th July 1899. His service in India lasted from 7th December 1900 until 22nd October 1908, an absence of eight years rather than ten, but it was thirty years before my mother herself was born, so a two year discrepancy is forgivable!

The break of service my mother recalled lasted from 28th July 1911 until 23rd August 1911. Looking at his enlistment papers, he had signed up for twelve years, then a short service enlistment. At the end of twelve years, he was required to re-enlist.

Albert Luxton’s records show that when he re-enlisted it was with Section D of the 19th Hussars. The history of the regiment is well documented:

Great grandfather Luxton’s memories would have been plentiful.

Yet despite the discovery of information, question remain. The medal card shows that he entered the theatre of war on 21st August 1914, but was not eligible for the 1914 star. It also shows him as an acting sergeant in the Military Provost Staff Corps, was this his service during the War of Independence in Ireland? Was he one of those responsible for the Republican prisoners at the Curragh? What memories of those times might he have had? 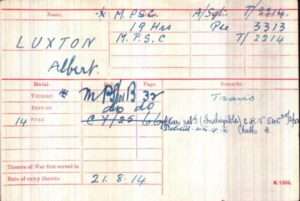