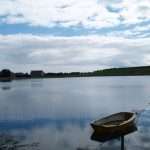 Philip King’s ‘The South Wind Blows’ plays softly on the radio; his voice as gentle as the unnatural mildness of the January night; the RTE programme conjuring an Ireland that might have seemed dead to one living in Dublin during the Tiger years.

There was an attractiveness in soft accents and soft landscapes during years in the North. The strident denunciation of all things ‘Irish’ by voices certain of their righteousness was something that pained. An unhappy man would write angry letters to the ‘Belfast Telegraph’ signing himself as ‘Non-Celt’ and then giving his address as an unmistakeably Irish placename. A mural inspired by tales of Cú Chulainn bore the inscription ‘Irish Out’. If people wished to reject any suggestion that they had an Irish identity – despite all the evidence to the contrary, including even the name of their country, then that was their choice; it became annoying when they sought to impose those views on others.

Always, there was Seamus Heaney to describe an Ireland very different from that inhabited by Free Presbyterian preachers, an Ireland where life was something to be affirmed, where even the things of daily life could be occasions of delight, moments when words became almost tactile. It seemed extraordinary at times that Heaney inhabited the same land, so different were his perspectives.

Each of Heaney’s collections of poems would be bought from bookstores in Belfast, in latter years from Waterstone’s because in Waterstone’s there was a feeling of stepping out of a world of accordion bands and garishly uniformed youths into a world where softness might be a possibility.

Heaney described the area in which we lived in the lines of ‘The Peninsula’, it seemed to be transformed in his description. From being a place of fundamentalist mission halls and hardline politics, it acquired a sense of being somewhere different. Looking seaward, it was easier to imagine the words assuming reality, than looking at the drab villages that dotted the coast.

Philip King described the storm that had battered West Kerry in the past week and in a silent prayer I wished that they might be well past, for tomorrow we sail from Rosslare to Pembroke.

Heaney would have provided a perfect accompaniment to King’s weather report. The seventh of his Glanmore sonnets:

Dogger, Rockall, Malin, Irish Sea:
Green, swift upsurges, North Atlantic flux
Conjured by that strong gale-warning voice,
Collapse into a sibilant penumbra.
Midnight and closedown. Sirens of the tundra,
Of eel-road, seal-road, keel-road, whale-road, raise
Their wind-compounded keen behind the baize
And drive the trawlers to the lee of Wicklow.
L’Etoile, Le Guillemot, La Belle Hélène
Nursed their bright names this morning in the bay
That toiled like mortar. It was marvellous
And actual, I said out loud, ‘A haven,’
The word deepening, clearing, like the sky
Elsewhere on Minches, Cromarty, The Faroes.

It is good to live in a land of softness. 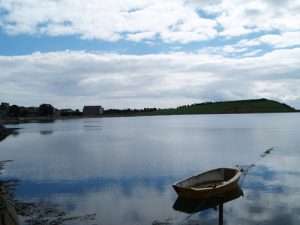