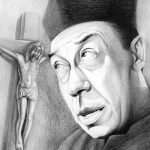 “In those days the word of the LORD was rare; there were not many visions. ” 1 Samuel 3:1

One of my favourite books of all time is one that is translated from Italian and which appeared in a weekly column in Candido, an Italian newspaper, in the late 1940s, “The Little World of Don Camillo” by Giovanni Guareschi. Don Camillo is the parish priest of a little Italian village in the years after World War II and is in continual conflict with Peppone, the Communist mayor of the village. The stories are filled with humour, but the thing I most like about the stories is the conversations Don Camillo has with God. Don Camillo will go into the church to pray and will tell God all about what has happened and God answers him. In the Don Camillo books and in the television and radio dramatisations of the stories there are wonderful conversations between the priest and the Lord. In one story Don Camillo has been given money for a church bell, but decides it would be better spent on a summer camp for the children of the village. He has a huge quarrel about this and in the evening tells the Lord all about it.

“Naturally,” replied Don Camillo, “when an unhappy priest has had to argue for two hours with a Communist Mayor in order to make him understand the necessity for founding a seaside camp and for another two hours with a miserly woman capitalist to get her to fork out the money for that same camp, he’s entitled to feel a bit gloomy.”

Don Camillo hesitated. “Lord,” he said at last, “You must forgive me if I even dragged You into this business of the money.”

“Yes, Lord. In order to compel that usurer to part with her cash, I had to tell her that I saw You in a dream last night and that You told me that You would rather her money went for a work of charity than for the buying of the new bell.”

“Don Camillo! And after that you have the courage to look Me in the eye?”

“The end justifies the means.”

“Lord,” replied Don Camillo, “it may be blasphemy to say so, but even he can sometimes have his uses.”

“And that is true enough,” agreed Christ.

Ten days later when a procession of singing children passed by the church on their way to camp, Don Camillo hurried out to say good-bye. . . . . . That night he dreamed that the Lord appeared to him and said that He would sooner the Signora Carolina’s money were used for charity than for the purchase of a bell. “It is already done,” murmured Don Camillo in his sleep.

We can understand the words from the first book of Samuel that we read as the Old Testament Lesson this morning, “In those days the word of the LORD was rare; there were not many visions. ”

Perhaps the problem is not that God no longer speaks, but that we no longer listen. Even in the life of the church, how often do we ever sit down and be silent and wait to hear what God might be saying to us? We’re always watching the clock, waiting to get things over so we can get on and do whatever else is next on our list for the day.

Miss Rabbage, my primary school teacher, who taught me most of the things I know, used to have an acrostic for what prayer was about. PATCH, P-A-T-C-H. The letters of the word stood for praise, ask, thank, confess and hear. By the time I went to theological college we were much more sophisticated in our acrostics; prayer was summed up in the word ACTS, A-C-T-S, adoration, confession, thanksgiving and supplication.

Only recently did I think about it, Miss Rabbage’s emphasis on hearing God had disappeared by college days. We don’t have time for listening and hearing in church, our services are filled with activity and sound and when we try to have occasions for quietness and contemplation, being honest, hardly anyone comes.

Maybe we do make time in our daily lives to be still and to listen, I don’t know. Sometimes I think that God might be shouting to us at the top of his voice, “Will you sit down and shut up for a minute?” We wouldn’t hear if he was.

We read that story from Samuel and we think that our own times are similar, visions are rare and the voice of God is hard to hear, but maybe it is our own fault. In the week ahead let’s try taking ten minutes at some point, and sitting down and turning everything off and saying like Samuel, ‘speak Lord, your servant is listening’. 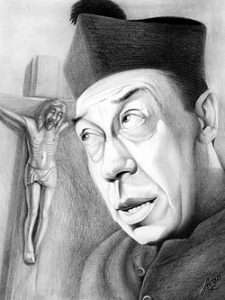