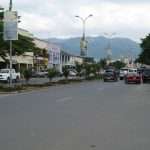 In central Bujumbura, there was a traffic roundabout. The red numbers on a digital clock shone brightly in the night. It called to mind a pharmacy in a French provincial town, outside of which there are digital clocks that inform passers by of the time, the date and the temperature.

My Burundian friend pointed at the clock, ‘We regard this as our city centre’.

There was a momentary temptation to say, ‘It’s not the Eiffel Tower or Marble Arch, is it?’ To have done so would have made little of a spot my friend regarded as important; no-one likes to hear their country criticised by foreigners.

As the bus wound its way down the hairpin bends of the Austrian mountain road, it seemed hard to imagine what most of the population of Africa would make of European buildings and infrastructure. An OBB locomotive, pulling a lengthy goods train, rolled through the valley on a railway line that ran along the side of the mountain, hundreds of feet from the valley floor.

The bus reached the town where dozens of skiers got off to board other buses that provided shuttle services to various parts of the town. Sitting on a bus that would stop at the hotel door, the infrastructure to run a single ski resort seemed extraordinary: a funicular railway, cable cars, chair lifts, an entire sophisticated transport system to allow holiday makers the opportunity to ski down mountain slopes.

The transport system is only the beginning of the requirements. The ski runs are prepared with precise civil engineering and expensive piste machines, great road makers that go out each night to roll each of the runs to ensure that the ski-ing conditions are of the right quality for the next morning. Set into the side of a mountain there was a concrete structure with doors one would expect from some light industrial building, the instructor said it was a pumping station for bringing water up the mountain for making artificial snow when sufficient natural snow has not fallen. ‘Above it’, he said, ‘there is a reservoir for storing the water’.

It would be beyond the comprehension of my Burundian friend that the huge cost of building a reservoir near the top of a mountain in order to provide water to make snow for people to have an opportunity to ski.

This single Austrian resort, only one among many In Europe, has more by way of sophisticated infrastructure than most African nations. Where across most of the countries of central Africa is one likely to find the sort of technology that allows the building of state of the art cable cars?

How can we manage extraordinary sophistication in the building of holiday facilities when we cannot achieve the most basic facilities for hundreds of millions of people?

The cables and the cars that cross this valley are made possible by market economics, somehow those same economics must be made to work to provide infrastructure for the poorest.