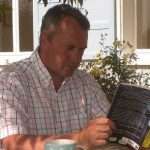 ‘There are grey hairs on your head and you know it not’.

I never knew from where the quote had come, but its meaning was clear enough: you can get old without realizing it.

Going into the cafe at 8.30 pm, it appeared we were probably the last customers of the day. A man and woman sat at the bar while two young women sat at a corner table watching sport on television. The waiter pushed two tables together and we sat down, ‘what can I get you?’ Our order of coffee and hot chocolate wasn’t going to add much to the takings for the day.

It was upon leaving that we realized that we were not the last of the customers, but among the earlier ones. The cafe had opened at 7pm and would not close until 4 am. Who would there be going to the cafe at three in the morning? The waiter would be hoping for people who would buy more than a latte and four cups of hot chocolate. Clearly, though, the night time custom must be good because the pub across the street had a sign announcing that it was also open until four. As one who regards midnight as a late time to be out, even the thought of socialising in the early hours was tiring.

But it wasn’t just being alarmed by the thought of late hours that brought a sudden sense of not being as young as before; pains in the right shoulder and lower back cried out that the body was not as durable as it might have been in younger times. Twice falling heavily while skiing this morning, the afternoon gave time for the aches to become firmly established. A younger companion had fallen three times in the space of a few minutes and showed not the slightest sign of being any worse for his experiences.

Walking down the street after the latte and the hot chocolates had been consumed; the night air had become much colder. The chill seemed more than something physical – it was as though there were a whisper in the air that there were indeed grey hairs on my head, and I was trying to pretend that they were not there.

A pub we passed had signs on its front wall for each of the various local beers it sold. It might have been tempting to go in to sample a glass of the local brew, but clearly visible through the window were tables filled with twenty somethings – to have gone in would have been to look severely out of place.

A glance in the mirror should be sufficient daily reminder not to be doing things that would bring tiredness, pain or embarrassment – the grey hairs are plentiful.