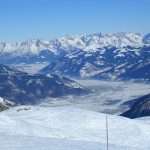 ‘I wish they would stop talking and just listen to the silence’.

On a chair lift up the side of an Austrian mountain, it seemed a strange comment. Each chair on the lift would hold six people, but the afternoon was not busy and few were filled. Sitting at one end of the chair, admiring the view of the neighbouring peaks, the Russian had sat at the other end. The voices came from people riding the lift behind us.

‘Is your work noisy?’ I asked.

‘No, I work in a design office – I like quietness’.

Liking quietness puts one in a small minority. The popular consensus is that every moment of every day should be filled with noise. People seem simply unable to function without being surrounded by noise in every place. The ubiquitous iPod seems a mandatory possession for a whole generation. Even going for a walk in the country cannot be undertaken without the companionship of hundreds of songs on a player. Cars are fitted with sound systems that would have been beyond the imagination of even enthusiasts in times past. Houses will frequently have numerous sources of noise, all of them switched on and playing all at once.

It is not just individuals; companies seem to think that people cannot function without wall to wall sound. Supermarkets play music by artists with which their target audience will identify, (presumably to make people feel better and prompt them to spend more money). Companies will have background music in the foyers of their office buildings. Even airlines have decided that we cannot cope without constant noise, filling the cabin with music before take-off and after landing and, sometimes, in moments when there is turbulence.

Why have we got into such habits? It is a recent thing. Before the plethora of technologies that allowed the playing of the radio and of songs in every conceivable location, many people were content with silence. I remember buying a new Austin Metro car in 1986 and it coming with no radio fitted as standard. Journeys were a time of quietness and reflection.

Why is there a need for noise? Is there a fear of the thoughts that might arise if one simply turned off the sound and took time to think?

And what happens to thought processes when everyone inhabits a world where noise is pervasive? How can we think if we are not prepared to be quiet?