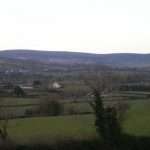 Standing to open the annual general meeting of the parish, I caught sight of one of the farmers sat in the back row. He would have rushed from his day’s work to be at the meeting for the eight o’clock start. His year has been dreadful, a nightmare summer followed by a winter that has continued into April. His fodder bill mounts as each day passes without there being adequate grazing for his cattle. Had I been him, I might have preferred my own fireside, and the company of my wife and children to heading out to a church meeting.

There are passages from the Bible that tend to be read at such gatherings, usually something from Saint Paul on the church being like a body with its various parts, or how everyone has their own role to play. It is easy to slip into a clerical jargon in which one appears to be saying challenging things while doing little more than repeating familiar formulae.

The temptation to stick with the conventional was resisted.

‘Meetings like this aren’t usually very exciting, in fact they are usually very dull and routine, a bit like life itself. But being dull and doing the routine things is OK, God is with us as much in the routine stuff as in the exciting stuff. I want to read verses from the book of Ecclesiastes, verses you probably have heard before, but verses that have something to say to us’.

I read the ‘there is a time for everything’ passage, at one time better known as the lyrics of a 1960s pop song by The Byrds than as a piece of Scripture. There were lines from Ecclesiastes Chapter 3 that seemed apt for the moment,

I know that there is nothing better for people than to be happy and to do good while they live. That each of them may eat and drink, and find satisfaction in all their toil—this is the gift of God.

There was a moment of realization that this was really what faith in a rural community was about, not theological concepts, not preachers’ metaphors, but the cattle fed, the bills paid, and a sense that someone up there cared about you.

The church has been monopolised by the speakers of the language of middle class suburbia, by the pedlars of metaphors, it needs to be re-earthed, literally, not metaphorically, so. Re-connect with working farmers, who give up the little enough spare time they have in order to attend a meeting, and we re-connect with rural communities.