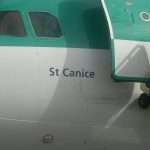 The prospect of a long haul flight seems to fill a colleague with apprehension.

I attempt to reassure him. ‘It’s not so bad – we would fly overnight down to Nairobi getting there around 6 am and then get a mid-morning flight to Johannesburg. A connecting flight would then have us there by evening’. He looks unimpressed. Perhaps he is one of those people who is not so much frightened by flying, as by the taking off and landing entailed in the process. Perhaps it is the idea of four flights that is too much for him – but better the fourth flight than 250 miles on African roads. Were there a railway service from Cairo to the Cape, he would have booked a berth in the sleeping car.

Realistically, the worst part of flying is neither taking off, nor landing, it is the air. Not the air outside, which is usually something absurdly cold, like minus 57 degrees Celsius, but the air inside, which is always excessively warm, and frequently filled with noxious vapours.

The days of ships were good. Ships had decks. You could go outside and get fresh air. You could watch Ireland disappear and Wales appear, or vice versa. Perhaps, more frequently, you could look aft and stare out into the greyness and the rain and then look forward and look out into the greyness and the rain. But, no matter the weather, the air was fresh.

Aeroplanes don’t have the option of standing outside, a breath of fresh air means fiddling around with one of those silly nozzles in the hope that the slight movement of air felt with the hand might reach the face. This is can be entirely inadequate!

A Dublin bound flight from Bristol where half the passengers are returning revellers from the Glastonbury Festival is not a pleasant experience. There seems to be no notice at check-in about carrying aromas. Even worse is to fly in the other direction after Wales have played in Dublin. Many of the red shirt wearing fans seemed not to have any luggage at check-in, they had the clothes in which they stood. Some seemed to have come straight from bars for the 6.25 am flight. A plane filled with beery breath, sweat and flatulence makes one long for the times when it took a whole day to be able to change at Crewe for a southbound train.

Close confinement with body odours can bring out a Victor Meldrew-like dread of civilisation, or of overnight flights across the Equator.