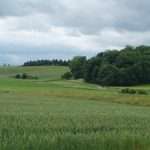 La lanterne rouge, that evocative French term for the person last in a cycle race, a phrase familiar in days when the Tour de France jostles with Wimbledon for sports coverage.

La lanterne rouge was the light hung at the back of a train. It conjures pictures of storybook journeys, great Canadian Pacific wagons rolling westward as darkness falls, Holmes and Watson speeding north on a sleeper from Saint Pancras, Maigret on a night train in 1930s France.

Trains have a quality of reassurance, of a sense that all is right with the world. La lanterne rouge may be the last person in the race, but that railway imagery conveys a sense of the rider being part of the train, part of whole, a single entity bound to a destination.

Had one lived among the wheatfields of northern France a hundred years ago, les lanternes rouges would have been regular sights on the branch line trains that criss-crossed the region. The little station at Mametz was on the departmental line from Albert to Ham; a line that was closed on 31st December 1949 and dismantled in the 1950s.

Little remains to indicate that a railway once ran there, little indication that one may once have seen une lanterne rouge rattling through the darkness on French winter evenings.

Unless one searches diligently, little also remains to indicate that this was once a place of bloody slaughter; that on 1st July 1916, Mametz was on the frontline and was the place where soldiers of the 9th battalion of the Devonshire regiment were cut down by machine gun fire as they stepped up from their trench; fire that was so deadly that the fallen were simply buried in the trench from which they had sought to advance. Their memorial is a plaintive declaration, ‘The Devonshires held this trench, the Devonshires hold it still’.

Among the blood and the mud of the Western Front, not much would have remained of the little railway that had joined towns and villages in peacetime. The West Countrymen would have been familiar with lanternes rouges; the Great Western Railway trains crossing their county from Plymouth to Exeter bound for the capital, the branch line trains cutting deep into a countryside all but unknown to the outside world.

The Devonshires would have seen les lanternes rouges on troop trains, carrying them to channel ports and on to the Front. Had une lanterne rouge marked the passing of a train from Mametz on a June night in 1916, it would have seemed like a vision from heaven itself, for it would have marked a place with no wire, no trenches; no mud, no blood; no war, no death. It would have meant the Devon men could have returned to their towns and villages, their harbours and their farms.

La lanterne rouge is an image of reassurance; may it ever remain no more sinister than being last in a cycle race.