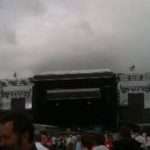 They did it again in Kilkenny tonight.

No concert by the band seems to pass without the singing of the 1980 ballad The River. The song tells of a working class teenager who gets his girlfriend pregnant and finds himself in a married life without work and without love; a man whose dreams crumble into nothingness. Lines from the song express a mood of hopelessness:

The song would seem to demand a quiet thoughtfulness on the part of listeners. Springsteen’s rhetorical question about the failure of human dreams, and the sense of alienation brought by the realisation that one’s aspirations mean nothing, is a question that might be asked by many, even most, people. Yet renditions of The River seem to have become a massive singalong. Perhaps it is the crowd expressing their own feelings of identification with the young man; it seems more like a massive karaoke performance.

Our culture seems to have embraced a trivialisation of human emotion. There are daytime television programmes where people pour out every most personal detail of their lives for the amusement of a studio audience and the entertainment of millions of viewers. The tabloid newspapers seem to exist for no reason other than to print the salacious and the scandalous. The thought that human feelings, human lives, are at the heart of the stories is no inhibition to broadcast or print editors whose viewing figures and sales are being progressively squeezed by the new media.

The singalong crowds are a reflection of a culture where sadness and pain are as much the stuff of entertainment as laughter and joy, but in filling the air with noise, the poignancy and power of the song are lost. For 30,000 people to be silent is not a problem (anyone who has been to a Dublin rugby match with 80,000 people will know how intense is the silence when kicks are taken), but it needs people who are prepared just to shut up and listen. 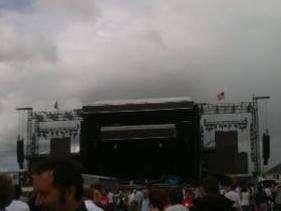