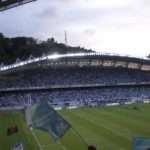 “Delocalisation” is the term used in French rugby when a match is moved from the home team’s usual ground to be played at a venue that may be some distance away. There is a reasonable rationale for the practice: the venue to which the games is delocalised may be somewhere with a much greater capacity; it may help create a sense of occasion; and it may build interest in the sport in areas where there are no local teams. Clubs in southern France may move matches across the border into Spain in pursuit of such goals.

Delocalisation may also produce a degree of disorientation: the city to which the fixture is transferred may be an unfamiliar place; the local populus may be surprised at 20,000-30,000 followers of a strange sport arriving in their city; and journeying across an international border, along with thousands of others, to a match that would logically be in the neighbourhood of those travelling is a strange experience.

Digital radio can be an experience similar to the delocalisation of a rugby fixture, there can be a sense of disorientation. Driving through the Irish Midlands listening to BBC Radio 4 Extra, there was a moment of confusion. Listening from 10.45 until 11.15 on a Saturday morning, there were not the usual news bulletins or continuity announcements that one expects from the BBC. The only clue that material being broadcast was not recent was when one of the presenters explained that those who had, at the time, objected to satirical references to the 80th birthday of the Queen Mother had not anticipated that Her Majesty would live another twenty years.

From deep in the recesses of the mind there had come a memory that Cyril Smith, the Liberal Party Member of Parliament for Rochdale, had called in 1980 for a public holiday to mark the Queen Mother’s eighty years. The memory had added to a sense of disconnectedness: who remembers such odd facts?

Contemporary communication has a capacity to make one feel completely delocalised. At least the BBC is in the same time zone, following programmes online, one can be in any place at any time. A click of a mouse and the news switches from ABC in Australia to CBC in Canada. News stories, at least, have some point of temporal reference: the date in Sydney may be different from that in Vancouver, but they are within a single 24 hour rotation of the Earth. It is in the realm of archive programmes, or music shows that are simply electronic juke boxes without human involvement, that there is the strongest sense of being cut off from the familiar.

Perhaps the sense of being delocalised explains why the most successful stations are those with the strongest sense of identity with their listeners, those which are current and which interact directly with the present reality. The disorientation of delocalisation also explains why it’s much safer for a team to stick to its own ground.