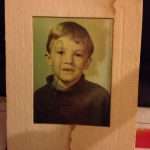 One of the abiding memories from childhood days is lying in bed in a room of the farm cottage in which we lived, sun shining through the window and my father standing beside the bed. While I wish he would stay, he would then be gone, before returning again. Sometimes, in sleepiness, I wasn’t sure how much time had passed. Struck down by measles, in bed for weeks, his appearances after work each evening must have marked the passing of the days. It was 1965 and though it was not the earliest of my memories, it remains the most haunting. It created a lifelong fear of illness, a dread of being confined to bed.

Measles was to be followed by years of asthma; a frightened small boy struggling to breathe, acute attacks sometimes meaning the doctor coming to administer adrenalin injections. Available medication was limited, even in childhood years it was not hard to know what tablets and medicines would be prescribed. Sleep was often difficult, the doctor insisting that it was important to try to remain as upright as possible, there would be three or four pillows in the bed. In the daytime, hours would be spent propped between cushions in an armchair. The experiences created a morbid fear of lingering too long in a chair to add to the fear of confinement to bed.

Laid up for the past five days, memories of those childhood years come back; annoyance at ill health, frustration at inactivity. Going to the medical centre this morning, the general practitioner whose wisdom and gentle firmness I have come to trust is not on duty. A different member of the practice sees me, then summons a colleague into the room for a second opinion; they are unimpressed at protestations that things are not as bad as they seem. There is a need for negotiation, to set forth the case in different terms. Explain that the infection is more simple than it seems, point out that medication addresses their concern. Eventually, the doctor accepts the argument, perhaps worn down by words, perhaps watching the clock. The parting comment concedes that I am probably no more at risk than anyone else.

Of course, the encounter might have proceeded on a different basis. Instead of discussing of how much improvement there had been in the physical symptoms, I might have talked about how sitting in the house had brought back the memories of childhood, but had I done so, it might not have been a general practitioner to which I was referred.