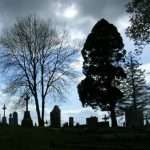 Bill was old when I knew him: a lean, lithe individual leading a solitary, spartan existence.

He counted himself blessed, having fitness and reserves of energy far beyond many of his contemporaries. While some sat at their firesides in front of daytime television; while some drove to the shopping centre to be warm at the expense of someone else; while some talked of ailments and treatments; Bill would be covering miles beside loughshore and seashore on a bicycle as old as himself.

An old wooden caravan with tyreless iron wheels, unmoved from where it had rested in years, provided Bill with summer quarters. He cooked on a primus stove and fetched water from a stream that ran down to the sea. How he passed his time on the desolate shore was a mystery. He professed a love for swimming in the chill waters of the Irish Sea; no summer day complete without a dip. One assumed that immersion doubled as ablution, for he was fastidious about his appearance. His clothes, though worn, were pressed and tidy; his thinning hair neatly combed back.

Bill seemed to require little by way of company. Perhaps he had for so long lived according to his own routine, that the presence of another person would achieve nothing other than upset; something that might be avoided by keeping focused on his daily tasks, going about all he did with a speedy efficiency.

If he had any religious inclinations, he never showed them: the cordiality with which he greeted the visiting curate would have been shown to anyone who might have called in for half an hour.

Bill’s Protestant identity was more a matter of ethnicity than faith; he knew what he was not. The tiny Protestant community in the West of Ireland in which he had grown up had dwindled and died. Bill had come northwards, for work and for a society not dominated by Archbishop McQuaid. Bill was happy for people to believe as they wished, provided no-one sought to tell him how he should think or behave.

Calling one day, Bill produced grave certificates, ‘I must get this in order’.

‘You are not planning to die?’

‘No, but it is good to be organised’.

The certificate for the family grave was for a parish somewhere in Connacht. Bill believed the church had long since closed. He had with the certificate a letter from the Rector of the parish. the letter dated from the 1930s, expressing the sender’s good wishes and pleading that the recipient might find it in their heart to send “a few shillings” to assist a struggling church.

Bill thought there little prospect of being buried with his family, even if the churchyard to be located.

Producing a second certificate with great enthusiasm, he said, “This is where I would like to go”. Smiling, he handed over a faded sheet of paper.

The heart sank; the certificate was dated 1910 and was from a parish in Co Down.

“I’m not sure if this is still valid”.

“But you’ll write to the Rector and make sure everything is all right, won’t you?”

The certificate seemed to be for the grave of Bill’s maternal grandparents.

Writing to the Rector, I apologized for troubling him and expressed understanding that a 78 year old certificate would by now be redundant.

He replied a few days later. The certificate was quite valid; Bill would need to make sure it was available at the time of his funeral.

Calling at Bill’s flat, I met him heading out on his bicycle. “I have your certificate and a letter from the Rector; everything is in order”.

“I knew you would fix things”, he smiled, putting the papers into his pocket.

I have never seen someone so happy at the prospect of being buried. Perhaps he was more confident of a resurrection than many who went to church.