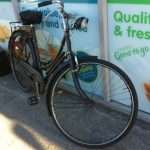 After years of following the same road, he has changed his route into town. He cycles down the busy main road rather than the narrow lane along which he used to pedal twice a day. Perhaps it was an awareness of the danger of the main road, along which rush lorries avoiding the motorway toll, that prompted him to start wearing a yellow high-visibility vest over the top of his long dark overcoat. A monochrome picture of him with his coat, flat cap, and a big black bicycle could have been presented as a picture from rural Ireland during any time since the 1920s, that is until the yellow vest appeared.

The vest seems his only concession to the 21st Century. He lives in a small caravan in a field, without amenities. In wintertime, he relies on candles and a gas heater for light and heat. Even the winters when the temperatures dropped to minus fifteen did not persuade him that he should leave his caravan and accept the offer of local authority housing, or even the sort of mobile home with proper amenities that the county council provides to those who do not want to leave the countryside.

His habit of attaching soft toys and dolls to gateposts and drainpipes of buildings on the roads around which he lives seems to have lessened in recent times. No-one can discern a logical reason for such behaviour, or discern from where the toys have come, though a neighbour thinks they might have been found among fly-tipped rubbish and that a reduction in fly-tipping has cut off the supply of items for distribution. He talks of spirits coming from a ruined castle, troubling those who fear for his welfare.

A conversation offered perhaps a glimpse of the influences that had shaped him. Mention of seeing him in his new attire brought a tale of his background. His family home had been a shed on a turf bog, with a corrugated iron roof; they had cut turf and grown vegetables and eked out a living. Perhaps a lonely caravan, that might once have been drawn by a Ford Cortina heading to the seaside, does not seem austere to him; perhaps gathering an abundance of toys and displaying them on the roads around is a compensation for those things he never enjoyed during childhood years. Perhaps – who knows?

What seems odd is that this is not a character from an oral history, nor a figure from the pages of a novel, but this is a man who is fresh and fit and who seems able to bridge at least a century of rural Irish life in his spartan daily routine.