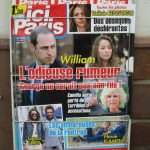 Six weeks until the summer holidays, perhaps the moment comes for a renewed assault upon the pages of “Living French” by T.W. Knight M.A. (Oxon), first published in 1952 and excellent value in 1979 at £1.25. Hardly a summer in the last twenty-five years has passed without reciting that Mrs Dubois has a pretty hat. In twenty-five years, there has been no progress beyond Lesson 5 of the book.

To be honest, only once in twenty-five years have I tried to have a conversation in French, and it wasn’t even in France. Travelling from Rwanda to Burundi in June 2009, Pasteur André, the Anglican priest delegated to see me safely to the border, spoke no English and I made the mistake of saying , “Vous parlez Francais?” This brought comments on many matters as we journeyed; not having a clue about most of what was being said, I mumbled a meek “oui” to questions which left me completely lost.

Handed over to Clement, my Burundian friend, on the Rwandan side of the border, being able to converse in English came as a great relief. As we crossed the bridge over the river marking the border, Clement turned to me. “You didn’t study at Mukono in Uganda, did you?”

“Ah”, I said, “that will be my French. Well, more precisely, my lack of French.”

I did not attempt to explain Madame Dubois’ pretty hat to Clement, who speaks at least three, probably four, possibly more, languages fluently and slips seamlessly from one to another.

“Where did you learn French?”

“I didn’t. I did it until I was 13 and never learned anymore. There was never much need for it. I can cope on holiday”.

A shake of the head, and we had walked on.

Many Africans require three languages just to get through daily life. Being monoglot would be adequate for life in rural villages. Education, business, the media, travel and numerous other activities, demand knowledge of at least one European language.

Perhaps it’s a lack of exposure to other languages; more honestly, perhaps it’s just plain laziness. A stab at something in French will generally bring a sympathetic response from the hotelier or restaurateur, who will draw upon their reserves of English to avoid hearing their national language being further desecrated.

Knowing that the Gallic resolve will crumble and they will cave in and speak English, there is not the incentive to go beyond the aesthetic qualities of Madame Dubois’ headwear. What would compel progress beyond Lesson 5 of the book would be knowing that there were to be more journeys with Pasteur André. If a 45 minute car journey was sufficient to allow mistakenly claiming to having studied theology in Uganda, any further travel could be a severe embarrassment. Necessity is a very efficient master.

That’s a very pretty hat you have, madam.