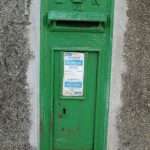 A loose ends day. Letters posted to the tax authorities in Ireland and the United Kingdom suggesting they might owe me money; quite a lot, according to my estimation, which will probably mean not so much when it comes to the calculations of the taxman. Letters, printed on paper and put in an envelope with a handwritten address and a postage stamp, at least bring confidence they will be received, unlike electronic mail which can disappear into nothingness, conveniently so it would seem sometimes.

Then from the carefully regulated world of the Revenue Commissioners and Her Majesty’s Revenue and Customs to the chaotic world of the Internet. Mail folders need to be tidied – but why are there so many of them? How many email addresses does one person need?

Going online in February 1997, email came with a monthly subscription to a service provider, in our case a company in the United States. Our address was the easily forgettable 106522.740@compuserve.com. There was some provision to personalise it, but a personalised email address seemed to smack of narcissism in times when email was a strictly serious matter.

The idea of paying for email seemed silly by 1999. Ocean Telecommunications, an Irish subsidiary of British Telecom, offered free addresses. Reserved in our thinking, we switched from Compuserve to a single Oceanfree address, an idea that now seems eccentric – two clergy in different parishes having one email address. The Oceanfree address is still the one that appears in church directories, it catches all the ecclesiastical junk.

Of course, two people using one address meant the inbox, which was perhaps only 2 Mb, quickly filled up. Ocean had a sister company, Ireland Online, and an individual account was opened to take the stress from the Oceanfree box.

Neither of the BT companies, however, offered the bells and whistles of Hotmail, so a third account was opened, more to be used for messaging than mail.

By 2005, Gmail was established. Joining was by invitation, but there were websites where one could go to request an invite. A nice person in Asia, who had sent hundreds of invitations, sent me the necessary link and what remains my principle email account was opened.

The following year, reconnecting our telephone number to Eircom brought an Eircom email address. The connection and address were desirable in ordering goods online from companies who preferred clients to have fixed line telephone accounts, so as to be easily traceable.

In 2007 came the sixth email address. This blog was given a new address on a new server and the move brought an email address based on the blog name.

Six optional email addresses should have been more than enough, particularly as only three were active, but a Vodafone billpay account in 2010 brought with it a Vodafone email address, which has never been used for anything; and in 2012, opening a Flickr account meant having a Yahoo address.

Being first on the scene meant being able to use my own forename and surname for most of the addresses, including Gmail; no-one was there to check or regulate or monitor. Maybe having eight email addresses is unexceptional, but maybe the world would be a safer place if Internet record keeping was but a tiny fraction of that of the tax authorities.