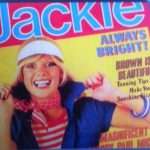 Buying a “Jackie” collection of 1970s pop songs for the “29th” birthday of the Best Beloved, the CD cover caught the eye. The cover of “Jackie” magazine for 22nd May 1976. It was not the girl who was pictured that caught the eye, (though she might have stolen a glance from a 1976 fifteen year old), it was the price of the magazine. Did “Jackie” really cost only 6p in 1976? What else could have been bought for 6p? Wasn’t that the price of a bar of chocolate? What magazine could you buy now for the price of a bar of Fruit and Nut? 6p really seems a very reasonable price; even in 1976 (and a veritable bargain for an insight into one’s teenage contemporaries). 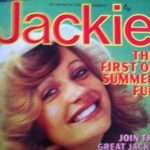 Pocket money at our evangelical Christian boarding school that year was 50p a week. Given the puritan regime under which we lived, we assumed 50p was a mean amount to receive; that only our school would have had pocket money at such levels. Yet, if one could have bought a copy of “Jackie” for just 6p, then perhaps 50p was not such a poor amount to receive, (not that many of those in our all boys school would have been inclined to admitting being aware of the existence of a girls’ magazine, let alone knowing its price).

What does 6p equate to in the 21st Century? What is the equivalent of 50p in current values? Were we wealthy without even being aware of it? If so, a friend who was sent the odd £5 note by his parents must have enjoyed infinite riches – it would have bought enough magazines to stock a newsagent’s shop.

The other headline that caught the eye was “Brown is beautiful: Tanning tips to make you a sunshine sizzler”. It is unimaginable that any magazine would carry such a headline now. There would instead be features on wearing tee shirts and caps and sun block. Of course, we subscribe to such political correctness, and ignore it completely. Look at the sun tan lotion on sale at any pharmacy and at airport shops; look at the advertisements for such lotions. Models for expensive bottles of sun tan protection are not pasty white; they are beautiful shades of brown. Tanned skin may have been the preserve of rustics and manual workers in the 19th Century; now it is still sought after by those who spend their holidays on Mediterranean beaches, whatever the health education experts may say; whatever the children are told about the need to keep their skin covered.

“Jackie” seems to belong to a long time ago and a galaxy far away. Its use as a marketing tool four decades later demonstrates the extent to which it permeated popular consciousness. Its innocence and simplicity belong to a world gone forever.