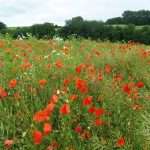 It is ten years now since we stayed on a campsite about forty miles north east of Paris. It’s a pleasant part of France, forests, rolling farmland and small towns. It’s hard to imagine that events of world importance once took place in this tranquil location. We were just outside of the town of Compiegne; close to a forest clearing where, on 11th November 19818, a railway carriage was the scene of the signing of the Armistice that brought the First World War to an end. The countryside around was dotted with cemeteries, both French and German, each of them a silent witness to the horrors of the four years that preceded the Armistice.

The village in which we stayed, Vic-sur-Aisne, had a French military cemetery on its northern outskirts. One evening, close to sunset we wandered up to look around the cemetery . Unlike the cemeteries maintained by the Commonwealth War Graves Commission, which have uniform rectangular headstones, the French tend to have white crosses rather than headstones marking their graves, meaning it is much easier to spot graves of men who were not from a Christian background.

On that August evening, we walked between rank upon rank of crosses. Sometimes there would be a headstone with a Jewish Star of David inscribed upon it; sometimes there were headstones with no religious symbols, France has been a secular country for a long time. At the top of the cemetery there were lines and lines of round-topped headstones, it seemed strange—who were these men? When we got to the graves it became apparent, each of the stones had what we assumed to be Arabic script at the top, because each of the men had Arabic names. These were the graves of Moslems who had died fighting in the French army, ‘Mort Pour La France’.

These graves did not fit in with the polarised worldview favoured by Western media since September 2001, they did not fit in with the view of history with which I grew up in England of the 1960s and 1970s. The Moslems in our view of history were the bad guys, the Turks were Moslems and the Turks were our enemies. Yet, here in this anonymous corner of northern France, were the graves of dozens and dozens of Moslems who had died in the mud and the blood of the trenches on the Western Front, fighting for “our” side.

If the coming four years of commemorations do anything, they should force a reading of the facts of history and force a questioning of a media that tries to re-write history.