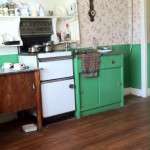 Of course, it was a nonsense to feel hurt. What cause was there to feel hurt? It was nothing to do with me and the person it might have hurt had long since moved on to higher things. Yet there remained a niggling pain, a sense that an injustice had been done, that a man much beloved had been the subject of, if not laughter, then comment that was not entirely complimentary.

What of it though? Even if people had been downright rude about the man, it would not have changed the facts, or the high regard in which he had been held. And they were not being rude, they had loved him dearly, it was just that their comments had grated with me. Perhaps that said more about me than about them, their kindness towards him surely gave them a little licence to engage in a gentle mockery.

I had been in his kitchen. I had even regarded it as a period piece to the extent that I had taken a photograph of it; a record of a way of life and an Ireland that was disappearing. Take away the electric cooker, and it might have been the 1950s or 1960s. On the other side of the room there was a turf-fired range on which a kettle might still be easily boiled on winter days when the power supply was down. Shelves on the wall held all the delph he might need. A wooden press served as a larder. The green paint seemed to add to the impression of stepping into a bygone age.

The picture had not been taken with any intention to disparage, rather as a pictorial accompaniment to memories of the man. Memories of the warmth of the welcome there was always at the door, and the taste of the wheaten bread and butter, and the strong tea drunk from a cup with a saucer. Memories of the memories shared away from the winter cold and the tales told of those who had lain long in the ground. Memories of a place that had changed beyond recognition since the days of his boyhood.

He had never married, never been given a chance to do so. A wife would undoubtedly have changed everything.

Maybe the comments about the kitchen, spoken in all innocence, stung because they jabbed at a personal sense that here was a man who had never received his just reward. Were he able to speak, his response might easily have been anticipated, “do you think I’m worried about it?”