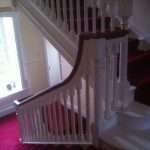 A day off and a list of jobs. A tin of white gloss paint and a small paintbrush and the chips out of the paint on the banisters are soon covered. In some cases, it is baffling as to how the paint was chipped; the cuff of shoes, or vigorous vacuum cleaning, or accidental knocks would not explain some of the damage.

Turning a corner of the staircase, there is a memory of similar banisters in the past, a turn in the staircase and chipped white paint. It must have been at school for there was no turn in the stairs at home, and the paint would have been chipped by the feet of dozens of boys. Each holiday, a tin of paint must have come out, for everything would look fresh at the beginning of term. Looking through old photographs, the bedrooms in the boarding area were equipped with scratched, mismatched furniture; the ceiling of the games room bears damp stains, the external walls were grey, unpainted.

Perhaps the school was just a reflection of the 1970s world in which we lived, there seemed much that was worn, ill maintained, rundown. The locomotives pulling the trains that we caught to travel to school for the start of term would be a dusty yellow and a grimy blue. The bus that met us at the station was a tired green and grey or an even older fading brown. The roads on which we travelled were marked with faded white lines. Broken pavements, overgrown verges, uneven roads were the norm.

What seems odd, in retrospect, is that things were the way they were. Why did there have to be an air of decay and dereliction? Of course, there were severe economic problems, but weren’t most of the deficiencies cosmetic? Wouldn’t a tin of paint, or a bucket of soapy water, or a hoe and a spade have made the world look a different place?

Perhaps the state of the country owed much to adversarial politics and to an inclination towards blaming one’s political opponents for all the problems, but that would not have explained the state of our school, an evangelical Christian establishment that charged fees that were very high for the time (the annual fees being equivalent to what a working man might earn in a year). So why were the headboards and wardrobes in the bedrooms battered and scratched? Wouldn’t sandpaper and a tin of varnish have changed the look, changed the mood? Wouldn’t a coat of paint on the games room ceiling have covered the stains left by the damp? Wouldn’t the building have looked different if the grey cement rendering that covered the walls of the modern parts been whitewashed?

Feeling one is not prosperous seems to be about much more than economics, it is about the feeling one does not have the capacity to change things. Had we felt empowered, the pictures from the 1970s might have looked very different. 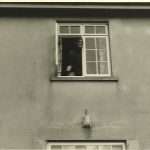