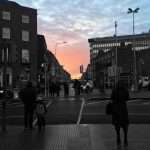 “The Mamas and The Papas versus The Boomtown Rats – it’s one of those days”: a friend’s words to accompany his photograph of a threatening morning sky on a Dublin winter’s day. It’s not about the ominous colours of an Irish morning, though, it’s a state of mind, an approach to life: buoyant optimism versus grim realism. “California dreamin” versus “Rat Trap”; being in L.A. or a “Banana Republic”.

“California dreamin” evokes imaginings of a mythical land where winter and gloominess have no place.  Perhaps being there on a December morning might shatter illusions that have persisted for decades. Perhaps, like heaven, California is the hope of something more, something greater, something thoroughly other than the damp chill of the short days. “California dreamin'” must rank among the most optimistic of songs recorded

But if “California dreamin'” is a state of mind, it doesn’t actually matter where one might be; buoyant optimism is possible anywhere. A friend of advanced years insisted that if happiness cannot be found in the here and now, then it would be hard to find it anywhere. Grey Dublin mornings should be days of The Mamas and the Papas, Irish winter days should offer contentment.

The gentle conversation of Grattan Fitzmaurice, William Trevor’s country Rector in The Hill Bachelors, with Father Leahy, his Catholic counterpart captures a character who finds contentment on his own doorstep.

To have the contentment of Grattan Fitzmaurice, a delight in the Ireland that surrounds us, would be to have a song of dreaming, and not one of grim realism. A song filled with optimism, a song that brings a smile, even on mornings heavy with the dark mood of winter, a song that carries the warmth of a southern Californian summer to a corner of Saint Stephen’s Green in December.