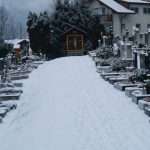 It was said that during the days of Soviet Communism, in days when State policy towards religion was at best one of repression and at worst one of violent persecution, that people would go to cemeteries as “spiritual” places. People might not have been members of any church, they might not have had any explicitly religious beliefs, but among the graves they found something they did not find elsewhere.

What did those people find among the dead? The question might still be asked, for the inclination to visit graveyards is not confined to any time or place. Driving into a town on a Sunday lunchtime, a crowd worthy of a football match was gathered along pavements, making its way towards a cemetery. Hundreds and hundreds of people, who could not possibly have all known the deceased, prepared to set aside an hour or more to stand remotely from the burial and then to file by the bereaved family and to shake hands and exchange a few words.

Why have death and final resting places such a fascination? The crowds gathered in that town were overwhelmingly male, most of whom probably rarely ventured near any church, yet the passing of an elderly neighbour brought them out to stand and wait on a cold February afternoon.

Perhaps it is about a confrontation with the one absolute certainty in life (or, if you agree with Benjamin Franklin who said “in this world nothing can be said to be certain, except death and taxes”, one of the two absolute certainties).  Perhaps walking through a cemetery is a declaration that life continues, that death has not yet had its moment. Perhaps cemeteries, far from being morbid, fill one with an awareness of life, create a sense of urgency to make the most of whatever time may be left.

Thoughts provoked by a graveyard presumably vary from person to person for each one’s memories are unique, each one will have a string of different associations, different moments and scenes will be evoked by even the plainest of gravestones.

Personally, standing and waiting for a funeral is an opportunity to reflect, to read inscriptions on the headstones and memorials and to ponder those whose mortal remains lay beneath the soil. The stories behind the inscriptions are what intrigue; the characters, their experiences, their encounters with life in all its rawness. Perhaps it is a mark of passing years, but walking among the gravestones has become something done not just while waiting for funerals, but in casual moments when a cemetery gate might easily be passed, and cemeteries in other places are as fascinating as those near to home. There is a peacefulness and a questioning – and sometimes even a story to take away.