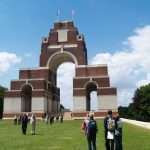 Trying to prepare a short talk for the local history society on local men who died on the Western Front, the thought occurred to look at where they died and where they were commemorated and something struck me I had never realized before. Of the forty-four who died in the Great War, thirty-five died in Belgium or France; thirteen in the former and twenty-two in the latter. Of the thirteen who fell in Belgium, seven have graves and the other six have no known burial place, their names appearing among thousands of others on memorials. Of the twenty-two who died in France, fourteen have graves and eight have only their names engraved on memorials. Two fifths of the men from the local community who died, forty per cent of them, have no known grave: it seemed a very high proportion.

With the forty per cent figure in mind, I sought statistics on the forces generally, how many of those who fighting for the British on the Western Front have their own grave?

Total British army losses in France and Flanders during the Great War were 564,715.  If the percentage of men having no known grave reflected the figure for the Mountrath men, then two-fifths of that total would have only names on memorial tablets, around 225,000.    A search for figures for those appearing on the memorials to the missing revealed a total of 314,176.   991 of that total had served with the Royal Naval Air Service, the Royal Flying Corps, or the Royal Air Force, where one would expect the majority of casualties to disappear completely, so among the ranks of the army, the bodies of 313,185 men who died fighting for  Commonwealth forces disappeared altogether, or what remained was unidentifiable – 55% of the British dead have no known grave.

Conducting a mental tally of the number of times I have been to the Western Front, I wondered why I had never asked the question before. Perhaps it is because rows upon rows of headstones are an image more powerful than solitary memorials like the arch at Thiepval. Perhaps words of writers like Francis Ledwidge, in his poem “A Soldier’s Grave,” created a false impression:

Then in the lull of midnight, gentle arms
Lifted him slowly down the slopes of death
Lest he should hear again the mad alarms
Of battle, dying moans, and painful breath.

And where the earth was soft for flowers we made
A grave for him that he might better rest.
So, spring shall come and leave it sweet arrayed,
And there the lark shall turn her dewy nest

Perhaps it was the story of Ledwidge himself that caused me to imagine that the Mountrath percentage of men missing was high. One of a group engaged in repairing a road on 31st July 1917, Francis Ledwidge and his companions were killed by the nearby explosion of an artillery shell. Father Devas, the battalion chaplain, wrote that night in his diary, “Ledwidge killed. Blown to bits.” Although he was blown to bits, enough of Francis Ledwidge was found to give him a grave, how little there must have been of more than 300,000 men for them to have no identified resting place.

In Sebastian Faulks’ “Charlotte Gray”, the character Levade reflects on the graves of the unknown,

On the tombs of the English soldiers, the ones too fragmented to have a name, I remember that they wrote ‘Known unto God’. By this they meant that here was a man, who did once have arms and legs and a father and a mother, but they could not find all the parts of him – least of all his name.

Three hundred thousand, the majority of those who died, with not enough recovered to give them even a name.