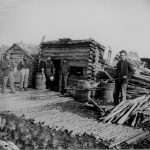 On grey days when mist and cloud create a semi-darkness even in mid-afternoon, certain music is therapeutic. Creedence Clearwater Revival and The Band have the capacity to change the mood, to bring another world into the confines of a small and battered Peugeot car. It was The Band’s “The Night they drove old Dixie down” that launched a train of thought. “In the winter of ’65, we were hungry, just barely alive”, goes the song.

The winter of ’65? A hundred and fifty years ago. Why had a song about events long past the capacity still to capture the imagination. Why would the American Civil War still have cultural relevancy? It is an odd song, in some ways, a tale told from the perspective of one who fought for the Confederacy, one who might have been regarded in a negative light, but it was a song written in 1969 to try to capture the spirit of a community that had suffered and believed it would rise again.

In childhood years, in England of the 1960s, the Confederate flag was a familiar sight. It was the sort of thing that flew at hippy encampments, or was stitched to the back of denim jackets worn by the riders of large motor cycles, or provided a bandana for young men with long hair. It was a symbol not of a political entity defeated and extinguished more than a century previously, but of dissent and rebellion in the current time.

But why was it remembered at all? It was not as though there were not plenty of other flags in the 1860s, and who would remember any of them? No-one in the 1960s was flying any other flag that had disappeared from usage a century before – there were no Neapolitan or Piedmontese flags to be seen in our corner of the West of England. No-one was singing songs about the Austro-Prussian War of 1866. No-one sang “we were hungry, barely alive” about the people of Tashkent, thousands of whom died in a Russian attack in 1865.

What was it about the American Civil War that it had found such resonance in people’s minds. Perhaps it was because the conflict figured so large in the history of the country that by the 1960s had established a cultural hegemony in the world, though that might only be a partial explanation, for in the 1860s the United States was still to welcome tens of millions of migrants who knew nothing of General Robert E. Lee or General George Stoneman. What was it that would establish the war in the minds of generations of people whose forebears had no hand, act or part in the conflict?

Perhaps it was the photographs. This was the first war to be photographed, the first war where faces of young men are frozen forever in history. Pictures have the power to keep events alive. Had there been photography in Tashkent, or at the Battle of Königgrätz, perhaps different songs would be around today.