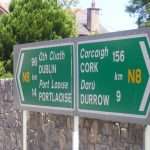 The stereotype of the Irish Midlands was of a flat and grey, dull drabness. Anyone who ever thought such a characterization to be reasonable should drive through Co Laois on the road down from Abbeyleix to Durrow at sunset on a June evening. Once the main route from Dublin to Cork and designated the N8, the opening of the motorway led to the road’s downgrading; from Portlaoise to Durrow it remains a national road, albeit the much more lowly sounding N77, and beyond Durrow it is now no more than a regional road, the R639.

It is the motorway that has made it possible to appreciate the landscape through which the road passes. Driving along at between seventy and eighty kilometres and hour would be insensitive if there were a line of vehicles trying to reach Cork, but this evening there was not another vehicle behind or ahead. The route passes through deciduous woodland as it leaves Abbeyleix, the spring was late this year, but the trees are now in full foliage.  A friend told me that much of Ireland was once covered in such forests, but that the cultivation of land demanded the clearance of most of them. How old are the Abbeyleix trees? There is probably an answer somewhere. I was disappointed to discover last year that some trees have a natural life span, after which they begin to die back – is that really so? I preferred to imagine them as more like the elves from the writings of Tolkien, capable of living for as long as they wished.

Coming through the forest, the road curves through undulating land on its way to Durrow, the “oak plain”. The village is said to date back three hundred years, the place has been settled since antiquity, ring forts persist from ancient times, a Christian presence from the time of Fintan in the Sixth Century. The setting sun sharpens shadows and light. New mown silage fields seem almost white; buildings are dark against the western sky.

There is a momentary temptation to stop the car, to pull over at the roadside and to just hold onto that moment of gold and blue and green and black; for a moment, to escape into the beauty, to retreat from painful thoughts.

On the radio, John Creedon plays “Echo Beach” by Martha and the Muffins, a silly, inconsequential song from decades past, that had, for me, the profundity of that Laois landscape. It was the background music to dark times whilst still in teenage years, the record that offered an escape, a relief from the pain in the head.

Of course, escapes are no more than that, brief moments of evasion, life must continue. “Echo Beach” was left behind and the road turned south for Kilkenny.