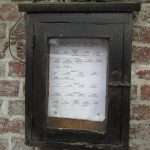 A return to France approaches and with it the realization that the prospect of attending a church service is remote. Walking through a village on the Somme in July, along a frontline where for four years life and death had intermingled in some horrifying embrace, it was clear that old stories and old ways no longer commanded authority. A sheet of paper inside a wooden box advised of Mass times in the area; there seemed to be one Sunday Mass which rotated around a succession of twenty-five different churches: Mass every six months, a world apart from parishes in Ireland where daily attendance is still common.

Perhaps the events in those battlefields wiped out all claims to authority; perhaps the descent into the mud was a descent into a world without God. Without its old authority, without the power to declare only one set of stories true, churches became lost who would now listen to what they said?

Churches became like Glory Boughton in Marilynne Robinson’s novel “Home”, wondering how people will listen to what we she might have to teach, we have that same loss of certainty about the stories we tell.

“Why do we have to read poetry? Why “ll Penseroso?” Read it and you’ll know why. If you still don’t know, read it again. Some of them took the things she said to heart, as she had done once when they were said to her. She was helping them assume their humanity. People have always made poetry, she told them. Trust that it will matter to you. The pompous clatter of “The Charge of the Light Brigade” moved some of them to tears, and then she had talked to them about bad poetry. Who gets to say what’s good and what’s bad? “I do”, she said. For the moment. You don’t have to agree, but listen. Some of them did listen. This seemed to her perfectly miraculous. No wonder she dreamed at night that she had lost any claim to their attention. What claim did she have? Could it be that certain of them lifted their faces to her so credulously because what she told them was true, that they were human beings, keepers of lore, makers of it? That it was really they who made demands of her? Her father taught his children, never doubting, that there was a single path from antiquity to eternity. Learn the psalms and ponder the ways of the early church. Know what must be known. Ancient fathers taught their ancient children, who taught their ancient children, these very things.

Glory Boughton knew that it was no longer sufficient to say, “This is so”. The Somme churches testify to a failure to understand that it is no longer enough to say, “This is so”. Perhaps it was in the Eighteenth Century Enlightenment, perhaps it was in the science, industry, and politics of the Nineteenth Century, but perhaps for a whole generation, it was in those fields of slaughter that the old world came to an end. People could no longer raise their faces and believe the things they were told to be true. “Trust that it will matter”, said the church and the people looked around and decided no longer to listen.