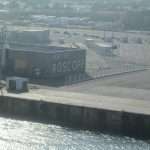 Why is it so unacceptable to hold up your hands and say, “Sorry, I’m not very good at that?” Why do people look perplexed if you say that it is much better when someone other than yourself does things? Is there some spirit of our age that says that you mustn’t say anything negative about anyone, even about yourself?

We drove across France today, well, across part of France. Starting 60 kilometres to the west of Bordeaux we drove to the port of Roscoff in Brittany. It was around 720 kilometres or 450 miles and took a full day. People will say that they suppose it is not so far when there are two people to do the driving and I point out that there is only one, that I do not drive in France, that if there are two of us in the car, then Katharine will always drive. Partly the reason is that I drive much more slowly and, had I been at the wheel, we might not have reached the port in time for the ferry, partly the reason is that I am not a very good driver.

This is not false modesty, it is an acknowledgement of a fact. I do not like driving and find it hard to spend hours on end concentrating on the road. I get cross at delays and frustrated if a journey takes longer than the time I had in mind. It is much better for everyone if my vehicular activity is confined to country lanes and farm drives, where slow driving is acceptable and where variations in journey time amount to no more than a couple of minutes because the journeys themselves are not much longer. Yet confessing to being a “bad” driver seems to cause unease with some people.

We seem to have reached a point in our culture where simple truth is thought unacceptable if there is any hint that it might cause hurt or upset. No-one is allowed to “fail” anymore, everyone is to be judged as having passed examinations and as having been successful. Every year, examination pass rates rise and more top marks are awarded, not because people have become more intelligent, nor because they have worked harder, nor because teaching has improved, but because it is not acceptable to say, “sorry, you’re not very good at that.”

Wouldn’t all of us be better off (and much safer) if we could tell the truth? I’m not a very good driver, and no set of statistics will change that particular fact.