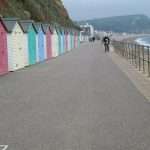 One of those mornings when the greyness seemed to envelope anything. It was not actually raining, just maintaining a constant threat; the sky was an unbroken blanket of cloud; even at midday, vehicles drove with lights switched on. The flow of traffic along the motorway was constant, a line of heavy goods vehicles occupying the inside lane.  Heading up the M5, the signs announced the distances to Birmingham and to the junctions for roads to London and to the North.

A sense of greyness can often be dispelled by imagining it is some other time. Rolling the calendar forward six months, instead of it being Monday, 25th January, it was Monday, 25th July. A Monday would be the best choice for imagining travelling south instead of north, for on Saturday and Sunday the traffic might be at a standstill by the middle of the day. Monday, 25th July, and the destination is not a stop on the road back to an Irish winter, but is a seaside town or village deep in Devon or Cornwall.

There is an indefinable sense of excitement at such a journey. Of course, a West Country campsite has not the sophistication of somewhere Continental, and certainly has not the luxury of a Mediterranean hotel, but in that flow of traffic there is a shared sense that this journey is to somewhere special. People have saved all year, have waited all year, for this moment, this opportunity to turn the key in the front door and head to a place where neither alarm clock nor telephone ring and where troubles can be forgotten for a fortnight.

Drawing closer to Birmingham, there is a thought that maybe there are people driving that motorway at that moment, who are pondering as they travel what the journey might be in six months’ time. What places were they imagining, the thought of which would brighten a January day? What beaches and harbours were there to draw them in search of a parking space? What pubs and cafes would attract their money? How many ice creams and candy flosses would be allowed in a single week? How many chips would be bought and how many burgers? What souvenirs would they buy from the shops that are now deep in the season of hibernation? Who would be with them on their holidays?

Perhaps six months seems forever on a grey day in January, but aren’t holidays about imagining? Rarely does the reality match the anticipation, but, far from dampening enthusiasm, negative experiences only create a mood that “things will be better next time,” only add to the expectations of the time away.

On a grey day in January, summer is but a hop and a skip away. 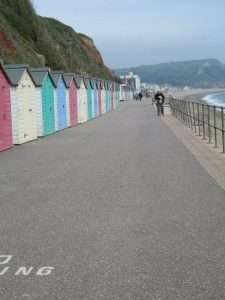