A kingfisher was mentioned in a radio programme, by the time I had paid attention it was gone, reference to it as brief as its visual appearances.

In childhood, kingfishers had always a quality undefinable in the vocabulary of those years. My grandmother had a jigsaw puzzle that was made and re-made. It was a riverbank scene and the kingfisher featured on a single piece, a piece that was always kept until the end. The kingfisher was the highlight, the culmination of the juvenile assembling of the picture, the tiny blob of turquoise and orange completed a scene that corresponded to no riverbank I had ever seen. Perhaps it was the setting aside of the kingfisher that caused its loss, but the piece was lost and the jigsaw lost its attraction.

Never in those childhood years was there a sighting of a kingfisher, it was not that we did not live in the heart of a beautiful part of rural England, it was not that rivers were not plentiful, it was that kingfishers seemed very elusive. I would be twenty-one before catching a brief glimpse of one, on a riverboat trip along the River Dart from Totnes to Dartmouth; images of that journey remain as vivid as when it took place in the summer of 1982.

Seventeen years would pass before 1999 and a family trip along the Dordogne river at Bergerac when the boatman pointed with confidence to the martin-pêcheur that flew along between the boat and the riverbank. Another fifteen years later, in 2014, travelling with friends on the sister boat of the one on which we had previously travelled, travelling along the same stretch of that French river, there was a sense of childish delight as we saw a kingfisher flying by with an indifference to our presence.

Three sightings in fifty-five years of life, perhaps it has been the rarity of the glimpses that has given the kingfisher an indefinable quality. Three glimpses, and those so brief that there was no opportunity whatsoever of a photograph, having to be content with a picture of the boat from the 1999 sighting and the quay from which the journeys were made.

Had the physics of the universe made travel through time a possibility, I could step into the long sitting room of my grandmother’s house and go to the cupboard and take out the box holding the pieces of the jigsaw, and if the step back was far enough, the kingfisher would still be there. 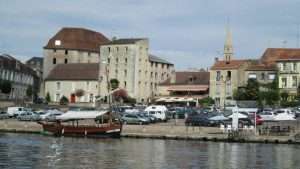