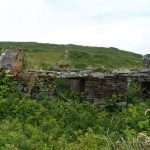 We sat drinking tea in front of a stove that radiated an inviting warmth. Conversations with him are an encounter with history. He is philosophical about the political situation, there is nothing he has not seen before, and times are always better than they were.

It would not have been appropriate to have asked him to repeat a story that caused him pain when he recalled it some years ago; a story that reminded him of the hardships of life that he is glad are now a long time ago.

“You had to take whatever came, whatever work there was. If you were sick, you could get a ticket to get assistance, but otherwise if you had no job you had nothing. The ticket was for five shillings – there would be women who would have set every penny of it out in little piles to make sure there was money to pay for things – tuppence in a pile for this, a penny-ha’penny in a pile for that.”

“It was a dangerous place?”

“It was. I remember a Saturday lunchtime – we had to work half a day on Saturdays. There was this man working on a bench halfway down the face of the quarry.”

(I assumed ‘bench’ referred to the ledges cut into the quarry).

“Anyway, he was going to the bog to cut turf that afternoon and wanted to get home and went to climb up the rope when the rope snapped and he fell onto the bench down below where he was working. He would not have been too badly hurt, but didn’t he get up dazed and step off the bench and fall down onto the rocks at the bottom of the quarry.”

They had gone home afterwards. The quarry had returned to working as usual the following week. Presumably, the man’s widow was given a ticket each week and was left to raise her family on a few shillings a week.

It is said that the revolution that created the Irish state was the most conservative in history; judging by the experience of working people, there is little evidence to the contrary. 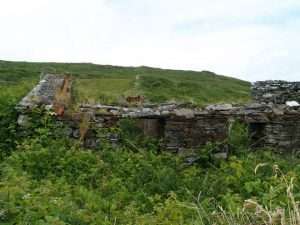