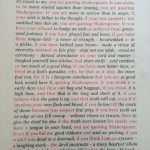 I did the Joint Matriculation Board’s English Paper I at 9.30-12.30 on Monday, 4th June 1979 – that I can recall the date and time of the examination is a mark of how profound an impact it had.

There could have been little cause for complaint, my revision reading of Hamlet had only started the previous Friday evening, I had little enthusiasm for the work. English had been a favourite subject in secondary school, except that by the time it reached A Level, all the fun had gone out of it. English meant English Literature and the surgical dissection of texts. Nothing was read for enjoyment; it was for analysis.

Jane Austen’s Emma was the novel. It was superlative, nothing in the world could match it for boredom. Poetry included Gerard Manley Hopkins and William Blake, (only years later did I discover that Blake hadn’t written the music for Jerusalem), and Chaucer.

The other drama included Tom Stoppard’s Rosencrantz and Guildenstern are Dead and Sean O’Casey’s Three Plays. Stoppard was a step too far for the rustics like myself and O’Casey lost a lot of its power outside of Ireland.

English Paper I was Shakespeare and Austen – it was a bleak start to the examinations. My tutor’s prediction of an “A” grade ended up as an “E”, a bare pass, when the results came through the following August, and that was only after an appeal. I retreated into the other subjects; economics had, and still has, a beauty about it, a poetry of its own, while history was filled with a gritty reality.

Thirty-seven years later, Stoppard and O’Casey have been read and re-read many times, but it is Shakespeare whose work has been a source of inspiration on innumerable occasions. Maybe it has been the stock phrases, maybe it has been the lines that have been so used that they have become hackneyed, cliched, but that he could provide such an astonishing store of material to have been thus used has to be a testimony to his endurance. “We are such stuff as dreams are made on; and our little life is rounded with a sleep,” may be a line from a television advertisement, but it is also a profound comment on our human existence.

On the four hundredth anniversary of his death, my personal reflection on Shakespeare is that he is far too valuable to be wasted on teenage boys. 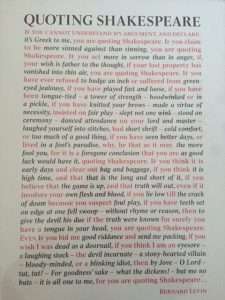