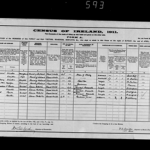 It is the night of the five yearly Census, but questions must surely be arising regarding the point of the entire process. The function of the Census form itself is unclear. Apart from gathering statistics on arbitrary racial groupings and doing a sectarian head count (leaving out the Methodists for some odd reason); it is hard to discern what useful information is being gathered.  Surely, the Department of Education  knows how many graduates there are, and the social services know who is in need of a carer and the Revenue Commissioners have some record of who works for which employer (and if they don’t, then surely there is some problem with their records?), and even Irish Water have details of the occupancy numbers of many houses.  In an age of information technology and fluid populations, the entire process seems unfit for purpose.

Comparing the form completed this evening with the most recent one available online, the census return for 1911, the most striking difference is in the number in the house.

There are four of us registered for tonight: in the 1911 Census, eight people lived in the house:

If that were not enough, the coach house in the front yard was occupied by the Rickaby  family.  Thirty two year old George Rickaby is chauffeur to the family; he and his wife Teresa lived in the coach house with their daughters, one year old Norah and Kathleen who was less than a month old.

Just five years before the events of Easter week of 1916, events which would change things utterly, life here seems to have been lived as though it were still the Nineteenth, or even the Eighteenth, Century.  Ten years previously, seventy year old Dean Hare and his two adopted daughters had employed only two servants.

1911 was the eve of the modern age; society was changing; communications and transport were being revolutionized; nationalism was dominant in Ireland and Home Rule on the agenda; three years later, the Great War would change the world.  The 1911 Census gives a view of the last days of the old society, never again would the old houses complete such census returns.  It is hard to imagine what conclusions will be drawn in a hundred years’ time from the census completed this evening. 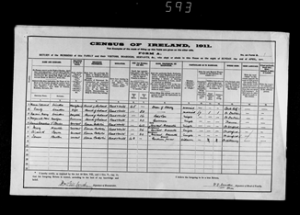