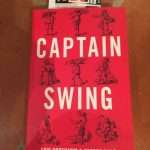 Mr Buchanan would be pleased, or perhaps disappointed that it had taken so long.

Mr Buchanan was for two years, 1977-1979, my history tutor at Strode College in the Somerset town of Street. He had an infectious enthusiasm for his subject, regrettably my professed interest in the material was never matched by the degree of application required for success.

We studied European history from the French Revolution in 1789 until the outbreak of the Second World War in 1939 and British History from the Battle of Waterloo in 1815 until the outbreak of the First World War in 1914. The history of Europe seemed filled with interesting things like wars and revolutions, whilst the British history was domestic, it seemed about social unrest and parliamentary reform bills and campaigns to improve the lot of ordinary people – and Ireland, always there, Ireland was waiting to make an appearance in each chapter.

It was Mr Buchanan who stirred up my abiding interest in Irish history. Whilst he had little time for the nationalism of his native Scotland, believing it diverted attention from more serious issues that needed to be addressed in late-1970s Britain, his presentation of the state of Ireland in the 19th Century evoked my sympathy for O’Connell and Parnell and Redmond.

Perhaps it was the books we read, perhaps it was that the compilers of the history syllabus for A-level students at that time did not want to court controversy, but our engagement with the history of England never evoked a passion in me that would have matched the passion felt in reading accounts of Nineteenth Century Ireland.

It was not Mr Buchanan’s fault. There were books he recommended that I simply did not read. Notionally radical in my politics, I never troubled myself to learn a history that embraced the community in which I had grown up. I knew about Sans Culottes, and Red Shirts and Communards and Internationalists, but hardly a thing about Luddites or Captain Swing or Chartists. There was an entire radical history that took place in familiar places and that was just overlooked.

Nearly forty years later, I promised myself I would try to read the history to which Mr Buchanan had pointed. “Captain Swing” had only been published a decade before he talked about it, by radical historians Eric Hobsbawm and George Rudé, it tells of the agrarian unrest that spread across much of southern and eastern England in the autumn of 1830. The book tells a story that includes towns and villages with which Mr Buchanan and I would be familiar. A whole history on our doorstep, and I missed it.

The first hundred pages were read in a single sitting. 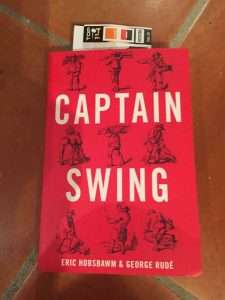